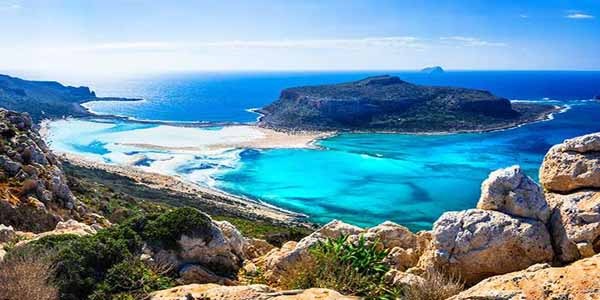 Wild, surrounded by palm trees or quiet, the beaches of Crete are over 300 and choosing the most beautiful is really an arduous task. If your summer vacation destination is the island of Crete, we have created a guide with tips and suggestions to visit the island of Greece and the best beaches in Crete.

From the beach of Vai to the beach of Elafonissi, passing through the picturesque beach of Balos, here is our selection of the most beautiful beaches of Crete worth seeing.

Crete is the largest island in Greece and the fifth largest island in the Mediterranean. It is one of the most beautiful Greek islands and we prefer it for several reasons. The sea in Crete is beautiful and, as we said above, it boasts white beaches that have nothing to envy to the Cariabi, pink beaches, coves, cliffs and dark beaches.

Third and last reason why we are hopelessly in love with the island is archeology. In Crete developed the Minoan civilization, an extraordinary and avant-garde civilization. The palace of Knossos is so big and labyrinthine that at the base of its complexity there is probably the birth of the myth of the Minotaur labyrinth.

The Palace of Phaestos, less known but more scenic, includes the remains of three different palaces to visit absolutely. Visit also the Palace of Kommos where there is also a wonderful wild beach. For a total immersion in the incredible history of Crete visit the Archaeological Museum of Heraclion and for a bit of nature and trekking, but not to the sea, go to the Samaria Gorge, a 16 km canyon dug in the White Mountains.

The most beautiful beaches of Crete

The coast of Crete offers hundreds of different beaches. From north to south you can choose between crowded or deserted beaches, beaches accessible only by sea and white beaches that have nothing to envy to the Caribbean.

The north coast of Crete is the most accessible and for this reason it is also the most frequented. The coast is sandy and full of bars, restaurants, deckchairs and umbrellas. The water temperature in the north is colder than on the south coast. Among the best beaches in Crete that deserve special mention are Agia Pelagia, Ligaria and Paleokastro.

The southern coast of Crete overlooks the Libyan Sea and is definitely the wildest and most untouched part of the island. Here the beaches can only be reached by boat or through scenic paths that lead to real corners of paradise on earth.

To visit the less frequented and less known beaches do not forget to pack your trekking shoes. You will need them to walk along the dirt paths and the many steps that separate you from the deserted beaches.

At Elafonissi, or Elafonisi, the color of the sand tends to pink and the sea is transparent. It is located on the west coast of Crete, in front of a small island made of sand dunes, bushes and sea lilies. The beach is connected to the mainland by a sandy passage that appears and disappears with the tide. On the soft sand of Elafonissi the Caretta-Caretta turtles lay their eggs.

Read also our article about the stairs in the woods phenomenon

In Elafonissi, not far from the famous pink beach, there is the beach of Kedrodassos. It is reached after a dirt road that can be reached by car, to which is added a descent on foot of about ten minutes. This little beach is little known and ideal for a little peace and quiet after a morning on the pink beach, which is beautiful, but also very popular, at least in summer.

The Balos Lagoon is one of those places to see at least once in a lifetime before disappear . It is located along the northwest coast and is one of the best beaches in Crete. The sand is very white and the water is turquoise. Behind the beach is Mount Geroskinos, while in front is the picturesque island of Gramvousa. You can reach the beach by embarking from Kastelli or along a dirt road.

If you are looking for a lonely and uncrowded beach in Crete, you absolutely must go to the island of Chrissi, where you will find beautiful coves and ravines set in a completely wild nature. How do I get to Chrissi? Just reach Iarepetra and from here board the motorboat that in 50 minutes of travel disembarks in the south of the island. The real wild wonder, however, is located in the north of the island, within walking distance.

Falassarna is not far from the famous Balos lagoon, but it is a little less crowded and more sheltered from the winds. Also here, as in Balos, there is very clear sand and shallow waters.

Read more about the best time to visit Portugal

Preveli is one of our favorite beaches in Crete. Its peculiarity is that behind the beach there is a creek with very cold water, excellent for refreshment. Secondly, it is difficult to reach, so it is very little beaten.

The beaches of Menies are located on the northwest end of the Rhodopou peninsula. Both are very quiet and immersed in the untamed nature and are an essential destination for those who love the solitude of the sea. They can be reached by boat from Kolimbari or by 4×4 through a dirt and bumpy road about 20 km long.

Now we want to point out two perfect beaches in Crete for days that are too windy. Between Plakias and Souda there are 2 small and hidden beaches that can be reached by going down the steps from the road to the sea.

We recommend the beach of Glika for several reasons. First because it is a dark pebble beach, useful to vary a little bit after all the white and pink of the beaches of Crete; two because naturism is tolerated here and three because it is a quiet beach that can be reached by a footpath and therefore not very popular.

Discover when is the best time to visit Slovenia

The area east of the island hides some of the best beaches in Crete, little beaten by tourism and worth discovering. Along the Gulf of Mirabello there are many beaches and coves where it is nice to stop. Reach the beach of Mochlos, a delightful fishing village. From there starts a coast made of free beaches and a small solitary cove that is located in the Gulf of Mirabello between Agios Nikolaos and Sitia. Do not miss a swim at the Go Beach, one of the most famous on the island.

After a ride on the beach of Elafonissi, if you love surfing, go to the bay of Falassarna, where the sand is white and the sea is emerald. Do not miss the remains of a fortified port, dating back to the Hellenistic period.

If you are looking for white and Caribbean beaches you absolutely cannot miss a visit to the Balos lagoon. However, this is not the only white beach on Crete. The beach of Falassarna is an expanse of white sand sometimes almost pink where the water is turquoise and crystal clear. In a much more touristy area, the beach of Makrigialos is characterized by a long coastline of white sand and spectacular sea. It is located within the bay of Kala Nera. Inside the Gulf of Mirabello and protected by a rocky cliff, the white beach of Istro is perfect for those who want to practice snorkeling.  The white beach of Polis is located northwest of the region of Pafos. Polis is the destination for those who want to add a touch of adventure to relaxation where sea, mountain and plain mixes.

Best beaches for children in Crete

Falassarna, about 25 km from Chania, boasts well-equipped beaches and small bays, with clubs and restaurants, perfect for those who go to the beaches in Crete with children. If you park at Galazia Thea, a place that overlooks the beach, you can reach the sea through a suspension bridge fun for children. The beach of the Balos lagoon needs a bit of effort to be reached, especially if you take a stroller. But with a little patience and a few breaks is possible. Once on the beach you will be in a pink paradise with very shallow waters suitable for children.

What to see in Barcelona visiting the capital of Catalonia