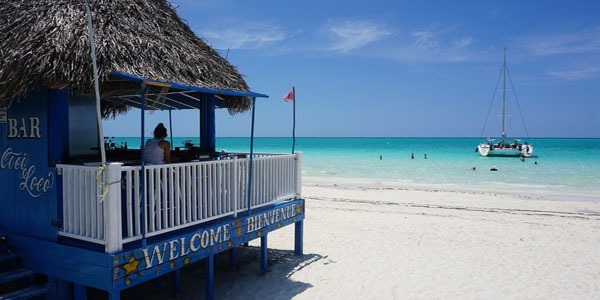 Cuba has spectacular beaches. In fact, it is one of the best destinations in the Caribbean. If you dream of crystal clear waters, fine sand and a good mojito, then you have to visit some of the best beaches in Cuba. It is true that some are quite far from Havana and moving around Cuba is neither quick nor easy. But you should also keep in mind that there are others much closer and that they will not make you invest so much time. In this post we tell you about the 10 of the most beautiful beaches in Cuba so that you can feel in paradise, and don’t forget to choose a good time to get to know the country!

Santa María Key is one of the best beach destinations in Cuba. Not only because of its incredible beaches, but also because of its easy accessibility. Unlike others, you can reach Santa María Key by car or public transport thanks to its rocky outcrop built on the sea, in fact, it is the only key accessible by public transport. In this case you will not have to go by boat and spend many hours travelling. For your reference, Cayo Santa María is less than 2 hours from Santa Clara. And if you plan to arrive from Varadero, it will take about 5 hours, but it’s worth it!

The whole coast of Cayo Santa María has beautiful water, but we believe that Playa Las Gaviotas is one of the best beaches in Cuba. It is located at the northern end of the key and is beautiful.

Keep in mind that Cayo Santa María is a great all-inclusive resort. There are no private homes or restaurants. For you to have a reference, the cheapest ones will cost you between 90 and 100 euros per night. So our advice is to try to sleep as close to this beach as possible. In our case, we stay at the Valentin Perla Blanca, which is the closest and even has access to the beach from the hotel.

Read also: The most beautiful beaches in Spain

Varadero, one of the top Cuba beaches

You’ve probably heard this name a thousand times on TV ads or read it in travel agencies. Along with Punta Cana and Cancun, Varadero is one of the great beach destinations in the Caribbean. In fact, it is the most visited beach in Cuba. Not because it’s the most beautiful, but because of its proximity to Havana and its great tourist infrastructure.

You can even connect to the Internet, considering that it is a rather scarce service in the country.

It has 22 kilometers of beach with a beautiful water color. Maybe it’s not as spectacular as the one in the keys, partly because it has more waves, but it’s well worth it! Varadero is only 2 hours from Havana. It’s very easy to get there by car or public transport from the Cuban capital.

And unlike the keys, although Varadero is dominated by luxury hotels next to the beach, there are private houses that will allow you to sleep very close to the beach for less than 20 euros per night.

What is the best stretch of beach in Varadero?

As we have said, it is a very long beach with 22 kilometers in length. We believe that the best stretch of Varadero is in front of the Hotel Internacional. There are not so many waves there and the color of the water is beautiful. Although really, it is one of the best beaches in Cuba and wherever you go you will surely love it.

Read our guide about the Best Paraguay Tourist Attractions

This key is one of the best kept treasures of the island. It is located at one end of Cayo Coco, much more popular. Playa Pilar is one of the best beaches in Cuba: fine sand and shallow transparent water, perfect for swimming with the little ones or the elderly.

It is also accessible by car, although in this case, you will have to invest much more time. To get to Guillermo Key it will take you about 4 hours from Santa Clara and 6 hours and 30 minutes from Varadero. Also, you can’t get there by public transport, unlike Santa María Key.

In Cayo Guillermo there are a dozen hotels. The closest to the beach is the Cayo Guillermo Resort Kempinski, ideal for enjoying one of the must-see beaches in Cuba.

Cayo Coco is one of the places you should definitely include to your one week in Cuba itinerary. It is located right next to Guillermo Cay and is much more visited. The main attraction is that it has a lot of interesting beaches, although we believe that Playa Las Coloradas is the most beautiful. Without a doubt, this beach located at the right end of the Cay is one of the most spectacular beaches in Cuba.

It is also accessible by car, although like Cayo Guillermo, it means more hours of travel from the main tourist spots in the country. Therefore, if you want to save time to get to one of the must-visit beaches in Cuba, the best option is to fly directly to its airport from Havana.

Cayo Jutías, the paradise near Viñales

Cayo Jutías is one of the best beaches in Cuba. It is very visited because it is only 1 hour and 30 minutes away from Viñales, one of the main tourist destinations in the country. But be prepared because the road is full of potholes. And if you come directly from Havana, it will take you a little more than 3 hours, but it is well worth it! Mentalizing about the long transfers is one of the best tips if you’re traveling to Cuba.

But keep in mind that it’s a beach to visit on a day trip since there are no hotels in Cayo Jutías. Remember to take mosquito repellent or you will be mowed down.

How to get to Cayo Jutías from Viñales

The cheapest option to go from Viñales to Cayo Jutías is to share a cab. It will cost you about 15 CUC per person (round trip). We will tell you all about the CUC and CUP, the two Cuban coins, so you won’t be taken for a ride.

This beach appears in all the postcards of the oaís, so we could not leave it as one of the best beaches of Cuba. Unfortunately, because of its location, most tourists have to be content with seeing it only through postcards. This key is only accessible by air from the airport of Havana, Varadero or Trinidad. In fact, many visit it on a day trip from these destinations.

As its name indicates, the key is located in the southern part of the country and is quite long. It has about 26 kilometers of beautiful, crystal-clear beaches. The best known is Playa Paraiso, although Playa Sirena is also spectacular despite being a little further from the hotel zone. We believe that these are two of the most spectacular beaches in Cuba, so if you have to get to paradise by a small plane, you make the effort, don’t you?

Here are the Best Tourist Attractions In Brazil

Playa Ancon cannot be compared to Varadero or the beaches of the keys, they are very different! It is very visited because it is only a 20 minute drive from the beautiful colonial city of Trinidad.

The water is not crystal clear, although it is quite clean. There is a deck chair service for 2 CUC and you can eat at one of the resorts that are right on the beach. It is quite long, so despite being popular, it is not overwhelming. We believe that it could not be missing from this list of the 10 most beautiful beaches in Cuba.

Playa Flamencos in Cayo Coco, one of the best beaches of Cuba

In Cayo Coco it is impossible to mention only one beach. It has 22 kilometers of crystalline beaches and although Las Coloradas is the most famous, Playa de los Flamencos also deserves to appear on this list of Cuba’s top 10 beaches. There are several hotels in the vicinity, so it is an ideal destination to choose an all-inclusive and not move from there for days.

There is a tourist bus that stops at the main beaches and hotels on the cay. It costs 5CUC and is valid for the whole day.

Cayo Levisa, the best beach in Cuba for families

In Cuba there are a lot of cays, but few as quiet as Cayo Levisa. It is about 60 kilometers from Viñales and like Cayo Jutías, it is a very popular excursion from this destination. There is only one hotel on the island, simple but pleasant. We recommend that you stay at least one night in order to enjoy the key as you deserve. Most people visit it on a day trip and don’t get to spend the night there, so when the boat returns, the key is empty.

If you want to enjoy one of the most famous beaches in Cuba, we recommend walking east to Punta Arena. There you will find almost nobody, only starfish, fish and crystalline water.

How to get to Cayo Levisa?

Unlike other keys, there is no road connecting the island of Cuba with Cayo Levisa. So you will have to take a ferry of about 20 minutes from Palma Rubia. It costs 35 CUC (both ways) and there is only one daily frequency per way (10h and 17h).

Punta Perdiz, in the historic Bay of Pigs

And finally, to finish this post about the most gorgeous beaches in Cuba, we didn’t want to forget to mention Punta Perdiz. Not only is it recommended for the color of its waters, but also for its historical location. It is located in the Bay of Pigs, famous for the invasion in 1961. Despite the fact that many Cubans died, its troops defeated the Americans after three days of fighting.

The entire Bay of Pigs area is beautiful and an ideal place to snorkel. Especially in Punta Perdiz, the most beautiful beach area of the Bay of Pigs. But don’t forget to visit the Cueva de los Peces, a few kilometers from the beach. It is a 70 meter deep cenote, the deepest in Cuba. But swimming there is a luxury, just like in Punta Perdiz, one of the best beaches in Cuba. They are a little more than 1 hour and 20 minutes from Cienfuegos, so it is one of the best excursions from the city.

25 best tourist attractions in Paraguay to visit in 2023