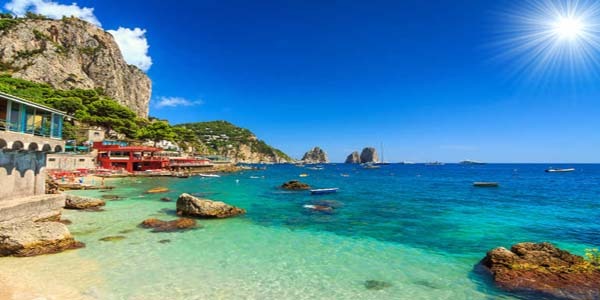 The islands of the Mediterranean are one of our favorite places in the world. If we ever have to get lost, or suffer another confinement, let it be with the breeze of the Mediterranean Sea. They belong to several different countries and each one has its own particularity, but at the same time they share many aspects that make them special: an incredible gastronomy, dream beaches and postcard landscapes. In this post we tell you about the 20 best islands in the Mediterranean, our favorites!

Did you know which European Island received for many consecutive years the title of the best Island Destination in Europe? It is not a Mediterranean island, but equally beautiful: Madeira Island.

1. Santorini (Greece) and its villages

Santorini is one of the best islands in the Mediterranean, I think almost nobody doubts that! Well, as long as you don’t get to know it in one day and it’s full of cruisers. Despite its popularity, this island of volcanic origin is simply spectacular, even though it doesn’t have great beaches! However, its attractions are different.

You can’t miss its white villages, especially Oia and its views of the Aegean. We recommend you to make the way from Fira to Oia walking to enjoy its beauty. Don’t miss it!

2. Mykonos (Greece), one of the best islands in the Mediterranean

Obviously we cannot mention Santorini without mentioning Mykonos, the second most famous island in Greece, and the most lively one! It’s famous for its summer night parties, when some of the best DJ’s in the world come, but Mykonos is so beautiful that it catches all the travelers.

It has beautiful beaches and its capital, Mykonos Town is very picturesque. This jewel of the Cyclades could not be missing in this post about the best islands in the Mediterranean. And you, are you more of Mykonos or Santorini?

3. Minorca (Spain) and its coves

Menorca is one of the most beautiful islands in the Mediterranean. It is one of 5 islands that conform the Balearic archipelago, but perhaps the most interesting of all. It has incredible coves like Cala Macarelleta or Es Caló Blanc, and its beaches look like swimming pools!

And obviously it has a very nice relaxed island atmosphere, especially its urban and historical centers like Mahon and Ciutadella. Beautiful!

Discover The Most Beautiful Beaches In Spain

Obviously, speaking of the Balearic Islands, we must also mention Mallorca. It is probably one of the most complete islands in the Mediterranean. It doesn’t matter what you like, in Mallorca it’s easy to find your space. It is a paradise for nature lovers: the Serra de Tramuntana is beautiful and surprises all its visitors.

Unfortunately many of us know the worst side of Mallorca, the uncontrolled parties in Magaluf, but don’t be fooled by that. Lose yourself in Sóller, the Cap de Formentor, the Drach Caves or the beautiful beaches – Mallorca falls in love!

5. Corsica (France) and its landscapes

Perhaps it is the great undervalued of the islands of the Mediterranean (less by the French, obviously). Like Majorca, it is also a super-complete island with a great variety of landscapes. If you have two weeks of vacation, we recommend you to do the long distance hiking route GR20. It is one of the most beautiful in the world! Although also demanding.

But it goes much further than this route, you can’t miss its beaches or elevated villages either. Without a doubt, one of the best islands in the Mediterranean.

6. Crete (Greece), the Greek island with the best beaches

If we have to stay with an island in Greece because of its beaches, we will certainly stay with Crete. It is the largest of the islands in the Mediterranean, so you will find everything on its surface! Charming cities like Rethymnon or Chania with its Venetian port and dreamy beaches like Elafonissi or the Balos Lagoon – the Greek Caribbean!

Malta is one of the favourite destinations of the Spanish – and British, of course! The island of Malta is the main one, but it is not the only one. Malta is full of history. You only have to walk the streets of its beautiful capital, Valletta, or get lost in the interior of the island and discover Mdina.

But do not forget to visit the islands of Gozo and Comino, which complete the country. In Comino you will be amazed by the beautiful Blue Lagoon and in Gozo by the cliffs of Sanap and its beaches. Don’t miss it!

8. Cyprus, one of the best islands in the Mediterranean

Cyprus is one of the most interesting destinations to see in Europe. Our visit to the island surprised us in every way. The Cypriot gastronomy is spectacular, how we enjoyed the halloumi! It also has beautiful beaches like Nissi Beach or incredible landscapes like the caves of Cabo Greco.

And without losing sight, unfortunately, of its political conflict. The northern part is occupied by the Turks and Nicosia is the only divided capital of Europe. Nevertheless, we recommend you to make a route by Cyprus to enjoy it to the maximum.

When Is The Best Time To Visit Cyprus

Sicily is a safe value and could not be missing from this list of the best islands in the Mediterranean, it is also super complete!

You can visit from important historical sites like the Valley of the Temples in Agrigento, the Roman theater of Taormina or the baroque cities of Noto, Ragusa and Modica to its incredible beaches.

Ah, and it’s also a land of volcanoes! Don’t forget to climb Etna or take an excursion to the violent Stromboli. Its cities are chaotic, but if you get too stressed out, go into a restaurant and order a plate of pasta – you’ll forget all about it!

Also check: Best Things To Do In Milan, Italy

10. Capri (Italy), one of the most picturesque islands in the Mediterranean

Still in Italy, we could not forget to mention the famous island of Capri. It’s small, but it has a lot of charm. It is usually a very typical excursion from Naples or Sorrento, ideal to enjoy the Mediterranean atmosphere. Don’t miss the spectacular Blue Grotto!

11. Milos (Greece) and its white cliffs

Milos is one of the best islands in the Mediterranean. The most famous thing is its white cliffs, although it is an island with a lot of history. For example, did you know that the famous Venus de Milo was found there in 1892? Surely you have visited it in the Louvre, as it is one of the most important works of art history.

Discover the Most Beautiful Islands Of Greece

12. Sardinia (Italy), the second largest island in the Mediterranean

To speak of the Mediterranean without mentioning Sardinia would be a great sin. It is the second largest island in the Mediterranean and one of the most visited. Although it has everything, the Italian island stands out for its white sand beaches and crystalline waters.

The Costa Smeralda is the most famous and exclusive area of the island. But don’t forget to go along the SP-71 and enjoy its panoramic views. Without a doubt, one of the best islands in the Mediterranean.

13. Rhodes (Greece) and the legacy of the Colossus

Rhodes is one of the jewels of the Dodecanese. Your visit surprised us very positively. Perhaps we did not find such picturesque corners as in some of the Cyclades, the beaches of Crete, but we did fall in love with some corners like Lindos and its Acropolis. Also don’t miss the medieval city of Rhodes, the largest in Europe!

14. Hvar (Croatia) and its lavender fields

Of the many islands in Croatia, Hvar is probably the most beautiful and complete – it has everything! It is the biggest island of Croatia and is full of beautiful beaches and small towns. One of the things we liked the most is the Spanish fortress of Hvar, the views from above are incredible!

And above all, don’t miss its lavender fields. In Hvar almost 10% of all the lavender oil in the world has been produced.

Discover when is the Best Time To Visit Slovenia

15. Formentera (Spain), one of the best islands in the Mediterranean if you like the beach

In the Mediterranean you will find beautiful beaches, but few islands better than Formentera to enjoy them. It is very small but ideal for quiet romantic getaways or idyllic family vacations.

16. Corfu (Greece) and its cultural heritage

The Greek islands have us in love. This Ionian island has a great heritage since during the last millennium Byzantines, Venetians, French and British have passed by, so the cultural legacy they have left is enormous! Especially in the beautiful old town of Corfu, declared a World Heritage Site.

Rent a car, drive around its roads and enjoy its secluded coves and monasteries – Corfu is well worth it!

17. Folegandros (Greece), one of the great forgotten

We believe that in this list of the best islands in the Mediterranean could not miss Folegandros. Although a priori it doesn’t have much name, it is a pearl of the Cyclades Islands. It is a very authentic destination, perfect for those who like nature and adventure.

18. Paros (Greece) and its typical villages

Paros is one of the most attractive islands of the Cyclades. Eclipsed by Mykonos and Santorini, Paros hides phenomenal beaches and beautiful cycladic villages of white houses. Don’t miss the beautiful fishing port of Naoussa!

If you like beaches, you will love Paros too. Besides, most of them are very quiet! Take advantage before mass tourism arrives on the island, as it did with other Cyclades.

19. Procida (Italy), one of the best islands in the Mediterranean

If you are looking for a picturesque place, Procida is one of the best excursions from Naples – it’s a typical postcard island! The island is very small, full of colorful houses and where fishing is still the main source of income of the island, although tourism is becoming more and more important. It seems that time has not passed!

Read what to do in Rome

And finally, to finish this post about the best islands in the Mediterranean we could not forget to mention Korčula. It is a super picturesque island, and where, supposedly, Marco Polo was born. The village of Korčula, in the east of the island, is nicknamed “little Dubrovnik” because of the large number of Venetian-style buildings that it preserves. The island also has many beaches, olive groves and vineyards – Mediterranean atmosphere!

Read also: Best 25 Things To Do In Slovenia

The mysterious stairs in the woods that lead nowhere

20 best places to visit in Liverpool

How to travel around Europe without spending too much?