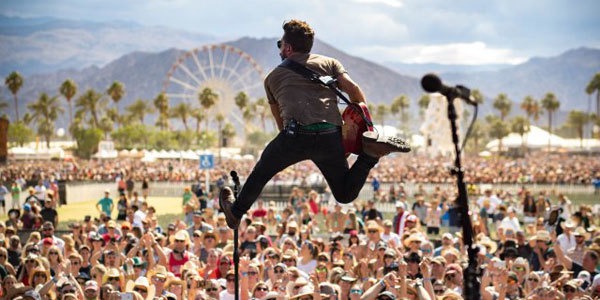 For many people a journey cannot be organized and lived without the right soundtrack. Music is the background to so many important events in our lives and, surely, can be a relevant aspect in any tour that respects itself. Are you planning your next departure and would like to include some important musical events in your itinerary? Music festivals of different sizes, dedicated to a certain genre of music or hosting world-renowned singers and bands, are regularly held throughout the world.

Let’s get to know together what are the best music festivals in the world from Portugal to Rio and all around the capitals of Europe. Maybe you will discover the next stop of your favorite singer or band!

Few music festivals are as recognized and famous as the Lollapalooza. Created in 1991 by Jane’s Addiction singer Perry Farrell as a farewell concert, the festival has since evolved into a major event involving numerous exponents of different musical genres. The performances are so many and varied and include live music, dance and comedy shows. Lollapalooza hosts more than 160,000 visitors over the three days of festivals and has contributed to the success of numerous artists, from Pearl Jam to Ice-T. Although the event was initially focused on alternative genres and indie rock, it extended to eclectic performances and more niche genres. Headliners of the past have been the likes of Paul McCartney and Metallica.

Tomorrowland is, since 2005, one of the largest and most famous music festivals in the world in terms of dance and electronic music. Hundreds of internationally renowned DJ’s make the audience dance from the various stages of the festival. In 2015 Tomorrowland hosted artists such as Alesso, David Guetta, Avicii, Steve Aoki, Martin Garrix, Dillon Francis, Tiesto and many more.

This great European rock music festival is dedicated to the most loyal fans of rock and metal music. It has been held since 1985 at the motor racing circuit of the Nurburgring, it was born as an event celebrating its inauguration. Thanks to the success achieved in its first edition, it has become a fixture that attracts, every year, the best bands of the world rock and metal scene. Metallica, U2, Sting, Aerosmith, Elton John, Kiss, Ozzy Osbourne and many others took to the stage at this festival.

Since 1993, this Hungarian festival has welcomed around 400,000 music lovers from over 70 countries every year. The event includes not only musical performances but also circus and theatrical performances, light games, dance performances and much more. On stage there were artists travelling all over the world, representatives of the most diverse musical genres, from David Guetta to Manu Chao, from Muse to Italian Roy Paci, to Korn and Blink-182.

If bigger is better, then Summerfest is just the best. It holds the title of the largest music festival in the world and takes place on the shores of Lake Michigan in Milwaukee, welcoming almost one million visitors and 800 artists every year during the approximately 11 days of the event. The musical genres embraced by the event are manifold, the artists who have played in the past editions were, for example, Paul McCartney, Weezer and Jason Derulo.

Splendour in the Grass Festival

Splendour in the Grass is a world-renowned music festival that has been held annually in Australia since 2001, making it a real institution for Aussies. Bands such as The Strokes, Flume, James Blake, Santigold, What So Not, The 1975, Leon Bridges participated in the festival.

The first edition took place in 2004 and since then this Swedish rock music festival welcomes every year the most ardent fans of rock and metal music. The event takes place in only two days, with the exception of the 2013 edition in which it lasted 3 days. It is one of the symbolic rallies of the heavy metal people, which has seen happen on the stage iconic Nordic metal bands such as The Sentenced, In Flames, Killswitch Engage but also Slayer and Soulfly.

The first edition took place in 1985 in Rio de Janeiro, as well as in 1991, 2001, 2011, 2013 and 2015. Six other editions were held in other parts of the world: Lisbon in Portugal, Madrid in Spain and Las Vegas under the name Rock in Rio USA. Taylor Swift, Bruno Mars, No Doubt, Metallica, Linkin Park, Ed Sheeran, John Legend and many others performed in this edition.

Born in 2011, this famous music festival offers an eclectic mix of performances and a touch of New York culture. Visitors can experience rock, electronic and indie performances, all of them perhaps tasting traditional New York culinary specialties. For those who want to take a break from the classic concert there are alternative activities such as the Silent Disco or games on the lawn. Major Lazer, Beck and Empire of The Sun are just a few names that have participated in the past editions.

It is the oldest and largest festival in continental Europe, its first edition dating back to 1971. Created by two Danish high school students, the Roskilde event evolved and from a hippie gathering it became a mainstream music festival. During the four-day festival, around 3,000 artists performed, including internationally renowned performers – such as Aerosmith and Beastie Boys – and lesser-known bands.

Among the things to do in Denmark is also one of the best Christmas markets in Europe.

The first edition of this annual festival took place in 1974 and received for several consecutive years the award for best music festival in the world at the International Live Music Conference (ILMC). They walked the stage of the event, among others, Smashing Pumpkins, Tool and Peter Gabriel.

The Reading and Leeds Festivals are also known as the sponsor, Carling Weekend. Since both festivals take place at the same time and usually with the same artists performing, they are generally mentioned together. The first edition of the Reading Festival took place in 1961 and this makes it the longest-running music festival in the world. In 1963, the Rolling Stones performed here.

This music festival has more or less the same characteristics as all California festivals but, unlike Coachella, it manages to stage a more delicate balance between mainstream and underground artists. Here you can also find a wide choice of street food and culinary specialties typical of the area. Pearl Jam, Social Distortion and Muse have cheered visitors during the past editions.

It is a music festival much loved by rock and metal fans, which saw its first editions in the United States but which was later exported to France, where it has been held since 2006. Due to the presence of bands considered “extreme” of their own kind, in 2015 some religious extremists targeted Hellfest with acts of vandalism. Groups such as Children Of Bodom, Megadeth, Mayhem and many others usually perform.

Read also: What to do in Sintra

Although the authentic jazz scene remains alive and rich at this American festival, in more recent times the doors have been opened to a more contemporary lineup, which has consequently attracted different types of visitors. The festival also includes a wide variety of food vendors and local artifacts.

Initially lasting two days, this music festival, which takes place at Victoria Park in London, has been reduced to a single day. The first edition took place in August 2007. The stage gives space to local alternative rock artists and underground bands little known in the rest of the world. Despite this the fame of the festival has grown year after year and tickets for the new editions are sold out within hours of going on sale.

The jazz music festival takes place on the shores of Lake Geneva in the beautiful town of Montreux and since 1967, the year of the first edition, has also embraced other musical genres in addition to jazz. Many world-renowned artists have participated, including Miles Davis, Santana, Elvis Costello, Brian May, Marvin Gaye, Eric Clapton and Phil Collins.

Read also: What Is The Most Beautiful City In Switzerland?

Also known as Rhythms of the World, it is a world-known festival that takes place in Morocco, the largest on the African continent. In 2016 it hosted artists such as Chris Brown, Iggy Azalea, Wyclef Jean, Pitbull, Christina Aguilera and many others from all over Africa, Europe and the Middle East.

It is a two-day festival, also held at Victoria Park in London in the summer. Music genre: and, over the years, has also presented similar events in Newcastle, Dublin and Ibiza. It is dedicated to party lovers and clubs, hosts every year DJS of international fame for a two-day non-stop dance.

This is the shyest and softest cousin of the impressive Glastonbury Festival. It has been held near a lake in the quiet town of Southwald for ten years now. The lineup is usually very varied, so much so that it also attracts more mature visitors, families but also young people of all ages and social backgrounds.
Location: Suffolk, England; Music genre: Alternative Rock, Pop; Period: July; Price: 197 Pounds

The most beautiful lavender fields in Italy

Via Francigena: the guide with the most complete information