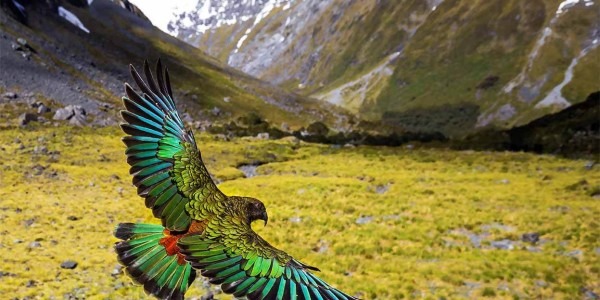 Mountains reflected in the clear waters of the sky, hidden beaches, picturesque views and snowy peaks: New Zealand is a fascinating, magical land, which has so much to offer to lovers of nature and outdoor life. This fascinating land is composed of two main islands: the North Island and the South Island, plus numerous smaller islands.

However you look at the best places to visit in New Zealand (and wherever you look), this tongue of volcanic land offers picture-postcard scenery: golden beaches, green-blue sea, lush vegetation, rainforests or barren landscapes with unforgettable colors. A land with a wild touch and that preserves ancient traditions, such as those related to the Maori culture.

P.S. While staying in the woods, you might even meet the kiwi, the night bird that is the symbol of the country… don’t be scared, it can reach dimensions similar to those of a cat!

This wonderful lake is located in the heart of the South Island, at the foot of the Southern Alps, a mountain range that reaches up to 3000 meters high. New Zealand’s highest mountain, Mount Cook (Aoraki in Maori language), is located just behind the lake and measures 3753 meters!

The mountains on the shores of the lake are called The Remarkables and certainly the reason is that they are unparalleled! The lake has a lightning-like shape and is the third largest lake and one of the best places to visit in New Zealand. It lies within a gorge at the foot of the glacier, nestled between the mountains. The highest of these is Mount Earnslaw (2819 meters).

The peculiarity of the lake is the tide that causes the water to rise and fall about 10 centimeters every 25 minutes. A Maori legend tells that this phenomenon would be nothing but the consequence of the heartbeat of Matau, a huge monster lying asleep at the bottom of the lake. If, then, in addition to the charm of legends, you are also fascinated by the cinema, this place is for you: here were shot most of the scenes of the trilogy of The Lord of the Rings and The Hobbit.

The beauty of this stretch of white beach is wild and peaceful at the same time; the tides and strong currents make it the ideal place for swimming, kayaking and surfing. The port is bordered by large sand dunes and natural pools that constitute the natural habitat of some species of local protected fauna.

Located in the lower part of the North Island, Castlepoint. This is one of the best places to visit in New Zealand, known for its incredible landscape and for its beautiful lighthouse that stands right on top of a cliff. The coral reef here is about a kilometre long and at the southern end is the “Island of the Seagulls”. With a bit of luck, you could spot dolphins here, but whales and humpback whales will only be visible during the migratory seasons.

It is a chain of hills that winds for about 25 kilometers, the particularity of the area, of volcanic origin, is the presence of beautiful beaches set between the mountains covered with green forests and lush.

This park, the smallest one of the best places to visit in New Zealand, is located on the South Island and is famous for its golden coasts and beautiful walking trails. Not only that, it also boasts spectacular flora and fauna and the most popular activities are trekking, swimming, canoeing and snorkelling.

Read also: Best things to do in Tasmania

For all Tolkien fans, this is definitely the right place. Do you know the City of the Lake in the Lo Hobbit trilogy? So, the filming took place right on the shores of this enchanting lake.

This area is located southeast of the South Island and is famous for its protected wildlife. A special mention for the yellow-eyed penguin. But it’s not uncommon to see sea lions too! The climate in the area is rather temperate, but the strong winds make it an ideal destination if you want to surf.

The area, on the North Island, is famous (and super photographed) for its incredible rock formations. The constantly changing rocks have created arches, caves, caverns: wonderful rock cathedrals. Four of the best places to visit around Coromanel are: Pauanui, Hahei, Hahei Matarangi and Hot Water Beach.

You should know that in 1886 New Zealand was hit by some violent earthquakes that ravaged the earth and led to the eruption of Mount Tarawera, as a result of which seven craters were created which, today, are beautiful volcanic lakes. This valley is one of the best places to visit in New Zealand and a true geothermal zone of hot water, boiling mud lakes, silicon terraces and smoking rocks.

Read our guide to the best tourist destinations in Brazil

The Fiordland National Park is the largest national park in New Zealand, included among the UNESCO World Heritage Sites. You can’t miss the fjords, glaciers and waterfalls: the most famous are certainly the Sterling Falls, 151 meters high.

Speaking of fjords, you can’t help but see Milford Sound (Piopiotahi in Maori language): an international survey in 2008 crowned it the best travel destination in the world and the most famous tourist destination in New Zealand. Rudyard Kipling (the writer of The Book of the Jungle and Courageous Captains) called it the “Eighth Wonder of the World”.

Moeraki are unusually large spherical boulders located along a stretch of Koekohe Beach; experts claim that they formed more than 60 million years ago.

A fascinating Maori legend says that the boulders are the remains of baskets containing eels, pumpkins and kumara (sweet potatoes) brought to shore by the tide from the wreck of Arai-te-uru, the canoe that brought the ancestors of the Maori to the South Island. Legend has it that, once landed, the canoe was petrified and that the dry rocks that extend to the sea from Shag Point are nothing but the shell of the wreck and the nearby rocky promontory would be the body of the commander.

It’s a beautiful town with snow-capped peaks. In Kaikoura you’ll find rich vegetation and you’ll be able to admire the sperm whale, the great toothed whale of the ocean, and not only: the unusual shape of the seabed allows you to see up close many varieties of cetaceans!

Travelling Abroad: 5 Things To Think About

A Memorable Getaway: 5 Reasons Why You Should Travel