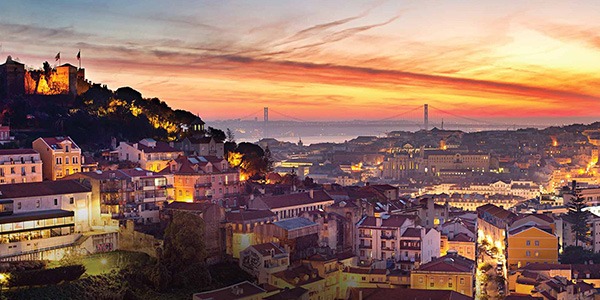 Leaving the western outskirts of Lisbon and going up to Sintra Portugal seems to cross another world. This city is in a green mountain landscape of palaces, country properties, parks and a medieval castle. In the centre, the Sintra Palace was a residence for the Portuguese royalty, and it is just one of the many exquisite properties to conquer you.

Another is the enigmatic Quinta da Regaleira, the playground of a rich eccentric, or the Pena Palace and its fairytale mud of towers atop a high peak. You can hike through woods planted with gigantic exotic trees in the 19th century. Or head to the coast to the beaches (better than the most beautiful beaches in Spain) under the cliffs bordering the sky, or Cabo da Roca, on the edge of continental Europe.

We explore the best 13 things to do in Sintra Portugal:

António Augusto Carvalho Monteiro was born in 1848 by wealthy Portuguese emigrants in Brazil and increased his fortune in coffee and precious stone companies.

That richness was channeled into the baffling Quinta da Regaleira, which is full of small monuments reflecting its charms for the Masons, the Knights Templar and the divination.

His romantic palace came out of a dream and bursts with masonry in the Manueline style, but it is in the park of the palace where the eccentric personality of Monteiro passes. Underground there is a system of tunnels and caves, all destined to confuse and delight.

Above are decorated gazebos, benches with sculptures and two “initiation Wells”, deep wells flanked by spiral staircases leading to the sanctuaries for the tarot ceremonies.

Recently named one of the “Seven wonders” of Portugal, the Pena Palace was ordered by King Ferdinand II in 1838 on the high ruins of an ancient monastery.

The ostentated Disney architecture and high setting are reminiscent of Ludwig II’s Neuschwanstein castle, but the Pena Palace is actually a couple of decades older and one of the best things to do in Sintra .

As was the fashion at the time, the Palace brings together many historical styles, from the Moorish to the Renaissance.

It was built as a summer residence and has fascinating stuccoes and trompe l’oeil inside and panoramas that will leave you open-mouthed in the park.

You have to spend time outside while Ferdinand II planted trees from around the world such as sequoias, tree ferns, ginkgo and cypresses Lawson that reach astonishing heights.

The most rewarding of all the walks you can do in the Pena Park is the trail that winds through the magical forest to the highest point of the Serra de Sintra.

At 528 meters, this prominence is marked by a Manueline stone cross and is sprinkled with granite boulders.

At this height there is a beautiful perspective of the colourful assortment of towers of the Pena Palace, as well as the green tones of the Sintra mountains.

On clear days you can see parts of Lisbon and the Tago estuary.

The borders of Sintra Portugal reach the coast and the westernmost point of continental Europe.

Cabo da Roca is the point at which the Serra de Sintra sinks dramatically into the ocean.

The promontory is located at 140 meters atop a granite cliff and with powerful boulders and outcrop hammered by the ocean at the bottom.

There is a lighthouse above, and a stone monolith with a cross marking this promontory, which was a famous seamark from the Roman era to the age of discovery.

The ground here is a carpet of evergreen ice plants, an invasive plant native to South Africa.

Raised on one of the northernmost peaks of Sintra lie the ruins of a mighty castle, built by the moors and enlarged after the Reconquista.

The walls have four square towers and a snake with the contours of the mountain on top of a sheer cliff, so it’s a sight to see from below and is an extraordinary vantage point from above.

Among the battlements you can look over the peaks, cliffs and rocky Spurs, to the Atlantic and over Sintra Portugal. You should also look for travel scams like fake tickets, pickpockets and taxi drivers with higher rates.

Historians can investigate the ruins for some interesting vestiges such as the large Moorish cistern that can be accessed via a staircase, and the ruins of a Romanesque chapel with frescoes in its choir.

Monserrate is in the depths of the mountain range, slightly removed from the other palaces of Sintra Portugal, and therefore is not as crowded.

But this does not mean that you can pass, because it is the Moorish palace that the motives are glorious.

It was all landscaped in the mid-NINETEENTH century for Sir Francis Cook, an English aristocrat who was conferred the title viscount of Monserrate by King Luís I. The park has bamboo plantations, caves, artificial waterfalls, ponds, exotic cedars and oceanic arboreal ferns.

And as for the residence, the Islamic influence is undeniable, in the plots of the arches, in the Arabesque Stuccos on the staircase and in the ceiling of the room of Music radiosa, which hosts concerts up to the present day.

You will immediately know this palace for its pair of white conic towers over a mixture of salt and annexes.

The Sintra Palace is the oldest palace in the city, and one of the best things to do in Sintra. No royal medieval residence is in a better state of preservation in Portugal.

Sovereignty lived here at alternate stages from 1400 to 1700 and each successive occupant added a bit of his own personality.

One, King Manuel I was responsible for much of the interior decoration, lining the walls with spectacular azulejos of Seville.

These are in Mudéjar style (Moorish revival) and have geometric motifs, similar to carpets.

Another of his works was the magnificent Sala dos Brasões, where the coffered ceiling sports the 72 coats of arms of the Portuguese royalty and nobles.

You prefer the strange destinations? Read our unusual places to visit in Japan guide!

8. National Palace and Gardens of Queluz

Queluz is a town east of Sintra, but in the same commune.

The thing to see is the Palace of Queluz, which took shape in the middle of the 18th century and has the exuberant Rococo architecture.

It was the summer retreat of Dom Pedro of Braganza, who would become the king consort of his niece, Queen Maria I. The interiors are sublime, decorated with gilded stuccoes and splendid frescos on the ceiling in the music room and the Queen’s Boudoir where there is a delicate trellis motif.

Outside you can savour the Baroque grandeur of the architect’s facades French Jean-Baptiste Robillon and the 100-metre canal, which is walled by white and blue tile panels.

9. Convent of the Capuchin

A short but very picturesque journey by car or tuk-tuk from Sintra will take you to the remains of a SIXTEENTH century monastery.

The Franciscan monks who lived in this brotherhood have chosen an extraordinarily austere life, in contrast to the luxury of Sintra Portugal.

They lived in tiny cells knotted from the rock and adorned with cork, and survived on vegetables grown in the garden.

This is still visible under the main courtyard, the Pátio do Tanque where there is a beautiful octagonal fountain.

You will be equipped with an audio guide to visit the cells, monastic buildings and chapel, which have been abandoned since the monasteries were dissolved in Portugal in 1834.

If you arrive in Sintra Portugal early in the morning the first thing you should do is give yourself a walking tour of the old Town.

You have to do it soon, when the city is still waking up, because in the late morning the streets are overrun by tourists.

The compact core winds into a steep valley and has winding cobblestone streets, narrow staircases, churches and palaces and stately homes.

Some of these include museums, such as the Museu Anjos Texeira and the Museu de História Natural, while others can be admired and photographed only from the outside.

Later, if you can challenge the crowds, make sure to call a pastelaria for one of Sintra’s desserts.

On the way to Cabo da Roca, you can follow the signs that invite you to descend on a dirt road to this beach.

Praia da Ursa can be one of the most spectacular beaches you have ever visited, and it is on that jagged coastline that you can see from the promontory.

The beach is almost recessed by high and jagged cliffs and outcrop, which help calm the surf, so it’s a rare beach on the Atlantic coast where non-swimmers can row safely.

Getting there is not easy, because you have to go down a path along the cliff, but it is a small price to pay for such an amazing scenery.

For a change of pace from the palaces and mountains there is a Portuguese Aviation aviation Museum at the Sintra Air base.

The museum is coming for its 50th birthday and in 2010 the fleet of planes was moved from Alverca to this huge hangar.

You can rule over a large fleet of planes, helicopters, propellers, navigation equipment, instrument panels and tons of other paraphernaires.

The exhibition begins with a chronology of early Renaissance aviation experiments, advancing through primitive biplanes such as the Tiger Moths to World War II planes such as the Spitfires and then to the jet era.

A highlight is the Douglas C-47A Dakota, which you can embark on, but only accompanied by the staff of the Air Force.

It is a sign of the high level of Sintra’s beaches that the second best beach in the city is still considered one of the best in all of Portugal.

Adraga is the next from Praia da Ursa, and has the same sharp rocks and intimidating wall of cliffs behind.

The good news is you can drive down, and there is a restaurant near the parking lot near the beach.

If you go carefully, it’s a fun place to explore, venturing through the rocks to find caves and tunnels.

The surf is a little more vigorous in this beach than its neighbor, but there is a lifeguard throughout the summer.

20 Best Places To Visit In Berlin