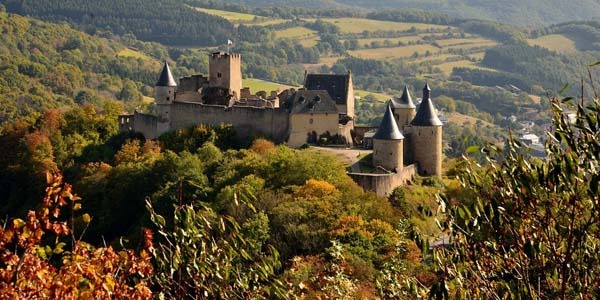 Luxembourg is a small country with half a million inhabitants, less than many European capitals! But in a short space you can find a great history and a lot of wealth, since it is the second country with the highest GDP per capita after Qatar. Its culture is marked by having been right in the middle of Roman and Germanic Europe. Therefore, a lot of the Luxembourg attractions are related to defensive constructions.

We tell you 25 things to see in Luxembourg to discover all that this small country has to offer. Besides having a small territory, it is very easy to walk around. Basically, because it is the first country in the world to offer free public transport. You can use buses and trains without a ticket.

List of 25 best attractions to visit in Luxembourg in 2021:

Historical center of the capital, one of the most beautiful places to visit in Luxembourg

A good place to start discovering Luxembourg is the historic centre of its capital. Five centuries ago it was part of one of the most powerful fortresses in Europe. The walls were demolished in 1883. Now, its place is occupied by green spaces perfect for walking or sports. Don’t miss the alleys in the center, they are very beautiful!

Casemates du Bock, a must see in Luxembourg

The Luxembourg fortress was a perfect example of military architecture. Its best example is the casemates, 23 kilometers of subway galleries where hundreds of soldiers and their horses could take refuge. The structure was so large that it was impossible to eliminate the casemates without destroying part of the city that had been built on top of them. So they have become a main historical attraction to visit in Luxembourg.

In the center of the capital there is a great viewpoint from which to see the Alzette river and the city below. The view from the dark roofs and the colorful facades is great. For us it is a must-see place in Luxembourg.

You can also read about the Stairs in the woods phenomenon

Grund, the most beautiful district to see in Luxembourg

Don’t settle for seeing the lower part of Luxembourg city from the viewpoint! Grund, that’s the name of that area, has beautiful little corners. It’s very quiet, it doesn’t feel like walking around a European capital at all. Its cobbled streets and traditional facades are like postcards.

Grand Ducal Palace, one of the most emblematic buildings to see in Luxembourg

Luxembourg is the only Grand Duchy in the world. The Grand Duke is the head of state and his official residence is impressive. It is a Renaissance palace that was built as a town hall for the city, but ended up becoming the residence and workplace of the Grand Duke. During the months of July and August you can visit the interior with a guided tour.

One of the most typical sights to see in Luxembourg city is the Adolphus Bridge. With the difference in level between the upper and lower city, bridges are essential to circulate around the capital. This one has been standing since 1900, almost nothing! Its arched shape is already an emblem, so don’t forget to take a picture of it.

This square represents the heart of the historical center of Luxembourg. There you will find the town hall, as well as the tourist office if you need any information about things to see in Luxembourg. There is also an equestrian statue of William II, who was Grand Duke and gives his name to the square.

Touching the border with France is one of the most important thermal complexes in Europe. In Mordorf-les-Bains you can immerse yourself in mineralised waters that are said to have healing properties. What they surely have are relaxing properties. The complex also has a gymnasium, saunas and a hotel.

Schengen Museum, a very educational place to explore in Luxembourg

Did you know that the Schengen area is called the municipality of Luxembourg? Schengen is a town that is touching France and Germany. There the Schengen treaty was signed in 1985 to abolish border controls between most European countries. The town is very small and its main attraction is the free museum dedicated to the history and meaning of the treaty.

The cathedral of Santa Maria is one of the most important religious buildings to see in Luxembourg. It is quite curious, because it combines original elements of Jesuit construction in the 17th century with modern sculptures inside. Its stained glass windows from the 19th and 20th centuries are also beautiful. Some members of the Luxembourg royal family are buried in the crypt.

National Museum of History and Art

Despite being a small country, there are many interesting museums to see in Luxembourg. This one deals with the history of the country through objects related to its past, mainly from the Gallo-Roman Empire. There are sarcophagi, coins, jewelry and archaeological remains. In the part dedicated to art, there are works of national artists from the 18th century to the present day. In short, it is a good place to learn more about Luxembourg’s history and culture. Admission costs 7 euros and is included with the Luxembourg Card.

Another ideal example of the importance of culture in Luxembourg is its wonderful philharmonic. It is one of the most renowned concert halls in Europe, where prestigious artists and orchestras from around the world perform. Beyond its good acoustics, the philharmonic building has a modern and surprising design created with more than 800 white steel columns.

Here is another interesting plan to do in Luxembourg for art lovers. The museum of modern art, known as Mudam, has hundreds of contemporary works. They are mainly by Luxembourg artists, but there are also some great names like for example Andy Warhol. Admission costs 8 euros and is also included in the Luxembourg attractions card.

Next to the museum of modern art there is an 18th century fortification that contrasts greatly. It is another example of the country’s past, full of defensive constructions.

Vianden Castle, one of the most beautiful castles to see in Luxembourg

One of the most famous ones is in Vianden, a charming village very close to the German border. It was built between the 11th and 13th centuries, although it has been restored to be able to enjoy it in all its splendor. The entrance fee is 8 euros and is included in the Luxembourg Card.

Müllerthal Route, one of the most picturesque Luxembourg attractions

There are a lot of places to see in Luxembourg, leaving aside the capital. For nature lovers, a must see is the Müllerthal route. This road extends for 112 kilometers. It is divided into six sections in case you don’t have time to walk it all. It passes through dense forests, incredible rock formations and of course you will also see some castles along the way.

One of the highlights is the Schiessentümpel waterfall. It has three small waterfalls in a totally idyllic setting, surrounded by vegetation and moss.

Echternach is another charming town to see in Luxembourg. Its alleys with medieval buildings are witness to many festivals throughout the year. In May and June there is an international festival of classical music, while September is the month of jazz. Throughout the summer there are flea markets.

In addition, Echternach has a 7th century Benedictine abbey of great religious importance. There is the tomb of St. Willibrord, which attracts many pilgrims. On the outskirts of the city there is a lake perfect for a fun day surrounded by nature.

Clervaux Castle, one of the most beautiful to see in Luxembourg

In the north of the country there is a peculiar castle because of its immaculate white color as opposed to the stone tones of most castles. In Clervaux a great deal of restoration work was done after the castle was badly damaged during the Second World War. You can take a guided tour not only of the castle, but also to discover the village of Clervaux, its abbey and its church. There is no lack of historical monuments to see in Luxembourg.

We still have more castles to see in Luxembourg! In the Müllerthal area you will find Beaufort Castle. It differs from the previous ones in that it is not as restored. So you can get a better idea of what a 12th century building really looks like. It is surrounded by beautiful surroundings for walking.

Planning a vacation in Italy? Here is what to do in Milan.

Larochette, one of the most charming villages to see in Luxembourg

This town is located in a valley surrounded by forests. Its streets will take you back in time, don’t miss the beautiful medieval square. And you could not miss a castle watching over the village. Without a doubt, Larochette is a very picturesque place to see in Luxembourg.

Returning to the historical center of the capital, the Place d’Armes is the main meeting place. Many bars and restaurants are concentrated there, which mount their terraces on the square during the summer. If you visit Luxembourg during the month of December you will be lucky enough to discover the Christmas market that takes place in Place d’Armes.

Traveling to Luxembourg is like going back in time by visiting many of its attractions. The oldest religious building in the capital is St. Michael’s Church. It was built in 987, although it has been destroyed on several occasions. Its current appearance is a mixture of Romanesque, Gothic and Baroque elements.

Another historical monument to see in Luxembourg is the Bourscheid Castle. It is located in a privileged place, at the confluence of two rivers. The construction is from the year 1000 approximately and you can visit the interior with an audio guide in Spanish to learn about its long history. We recommend you to stay until sunset to see how it is illuminated, it is very beautiful.

Tour the Valley of the Seven Castles

Did you think there were no more castles to see in Luxembourg? If you like them as much as we do, you can visit the Valley of the Seven Castles. This is how the region of Guttland, north of the capital, is known. In only 24 kilometers you can see 7 castles in the villages of Asembourg, Mersch, Schoenfels, Koerich, Hollenfels and Septfontaines. Ideal for a complete excursion that will take you back to medieval times

Monument of Memory, something emotional to see in Luxembourg

To finish our list of things to see in Luxembourg, we return to the capital to find a very emotional monument. The Memorial is a marble obelisk dedicated to all the Luxembourgers who lost their lives during the First World War.

The best places to visit in Germany in 2021

The best time to visit Cyprus in 2021

20 most beautiful German castles and palaces