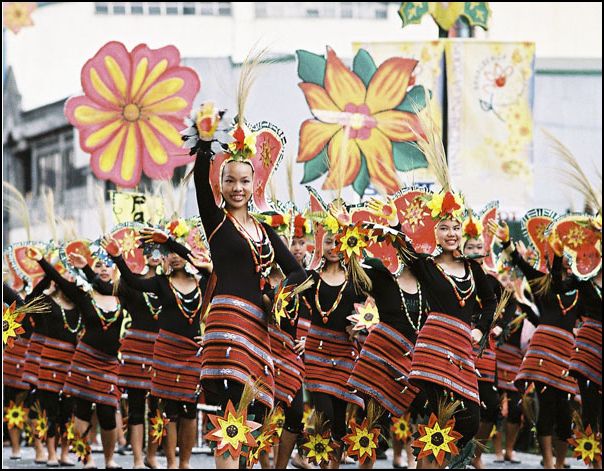 The Panagbenga Festival is considered one of the most beautiful and curious events in the world. It is one of the most important festivals in the Philippines and takes place in Baguio city in February.

With the complicity of much milder weather. Around the world, the colorful flowers are a symbol of many cities, starting with San Remo, or events like the Chiang Mai Flower Festival or the striking Hanami in Japan.

Flowers, which have always been a symbol of purity and beauty, but also of peace – “Put flowers in your cannons”- during the Baguio flower festival take on the meaning of rebirth.

In the Philippines you can find some of the most beautiful places in the world, such as El Nido, Boracay and Bohl. But even in an earthly paradise, great tragedies can happen. It was precisely as a result of a real catastrophe that the Panagbenga Flower Festival was born, so that all the people of Luzon Island could be given new hope.

What is being celebrated during the panagbenga festival?

Panagbenga means “season of blooming” and with this festival in fact it is intended above all to celebrate the nature of this beautiful location and to boost tourism, but there is much more.

On July 16, 1990, the Philippines, particularly the island of Luzon, was hit by a devastating earthquake, which caused about a thousand deaths and almost as many injuries. Five years after the tragedy struck the country, it was decided to hold a major event both to attract tourism again and to raise funds, which is how the Panagbenga Flower Festival was born.

Today, after more than 30 years, the festival has become a symbol of the rebirth of an entire people.

Read also: The Best Music Festivals To Visit While On Vacation

why the panagbenga festival is held in Baguio city?

The month of February was not chosen by chance to see the blossoming the Panagbenga Festival, but because of the favorable climatic conditions.

In fact, Baguio is located on the island of Luzon, at an altitude of 1,500 meters, and for most of the year has high temperatures and frequent rainfall, exceeding 4,000mm per year. While, however, it rains a lot in summer, in winter (December-March), the rainfall is much less; moreover, thanks to its altitude, the climate is mild, humidity is felt much less, and even the great heat offers respite.

Panagbenga festival: The parade and floats

Panagbenga blooming flowers festival is very similar to a carnival, only it features many more events and its floats are entirely covered with flowers.

The event, in some ways comparable to the Rio de Janeiro Carnival, does not last a few days or a week, but a whole month, during which floats parade, but there are also dances, concerts markets and much more.

This is a truly original event, which we can call unique in the world, and therefore deserves to be seen at least once in a lifetime.

While the Baguio blooms exposition officially starts on February 1, the actual crowd draws occur between February 28 and March 1, starting with two consecutive parades through the main streets of Baguio city.

A family celebration held the week before the start of the grand parade of street dancing, the Panagbenga sa pamilya Baguio (Panagbenga’s gift to Baguio families) giveaway takes place near Burnham park at the Melvin Jones grandstand and soccer grounds.

This day caters to the creative impulses of the little ones with a series of art activities and the main activity, “let a thousand flowers bloom,” puts the children to work painting banners used in the big street dance and float float parades during the week. Kite flying challenges and acrobat shows provide the rest of the day’s entertainment.

Booths throughout the grounds offer free face painting and henna tattoos, games, photo walls, film screenings and even free non-alcoholic cocktails for parents. The day ends with a special concert and fireworks display.

Two parades represent the main event of the Panagbenga festival, held toward the end of the month long celebration period. Expect to see street dancing and floats liberally decorated with flowers, like those you will find in the Pasadena Rose Parade (the scale is smaller due to Baguio’s narrow streets).

The session road will be closed to motorized traffic for a week after the parades. Cars will give way to artisans and entrepreneurs from Baguio and surrounding territories, who display their wares at stalls along the street.

The souvenir shopping scene is based on the best of the Philippines, from specialty foods and custom clothing to gadgets and novelty items. This is a good time to wander down the session road at your leisure, stopping every now and then to sample some Filipino food, even the scary-looking balut, a fertilized duck egg.

Certain stalls will let you haggle over the price, but do it just for fun. Some of the vendors transport their wares from far-flung provinces to get to Panagbenga, and it helps them make a profit at the end of the day.

At their home in Wright Park, the “Pony Boys” are a Baguio institution, taking tourists and horses on scenic rides along a set route.

On March 7, the Pony Boys have a day on the Panagbenga festival calendar to show off their riding skills. Ranchers, riders and other equine professionals enter in droves from all over to join in the day’s competitions, including barrel races, flag and barrel relays, and other tests of skill and speed. Spectators can come and watch (but not join) the festivities.

On the evening of March 8, Panagbenga festival officially closes with ceremonies at the Baguio athletic bowl near Burnham Park.

But you don’t have to go there to see the closing of the festival in style. Fireworks will be set off throughout the night, launching from five stations throughout the city to give most visitors a panoramic view of the airborne spectacle, wherever they are in Baguio city.

Other Panagbenga Festival activities and events

During the month long festival of dance and celebrations planned, Panagbenga also offers many other events and activities. Events change from year to year, but Panagbenga organizers usually provide a complete schedule and most hotels display schedules in their lobby.

Major brands and celebrities share the limelight with local talent at concerts and variety events. Many of these are free, held at prominent venues such as the City Baguio Mall (although there is still a charge for the best seats, usually purchased in advance).

Local organizations also organize special events such as paintball tournaments and art contests, both to raise funds and to promote their cause.

What is the Panagbenga festival means?

Panagbenga is an annual flower festival celebrated every February which takes place in Baguio City, Philippines. The term “Panagbenga” comes from a Kankanaey term meaning “season of blooming”. This festival reflects the history, traditions and values of Baguio and the Cordilleras.

What date is Panagbenga Festival 2023?

What makes unique of Panagbenga Festival?

What stands out during the Panagbenga Festival is the splendid use of floats. What is this? They are covered with beautiful flowers, creating a distinct parade, unlike others that are held in the country. To say that colors come alive during this long festival is, to put it mildly.

What is the tradition of Panagbenga Festival?

One of the most fun activities at Panagbenga Festival place that many people look forward to is the Grand Street Parade. Here the locals and revelers parade through the streets of Baguio wearing the most colorful costumes and some traditional clothes of the tribes in the north.

What is the important symbol in Panagbenga Festival?

The flower show at the Panagbenga is characterized by the season flowers growing in the summer capital of the Philippines known also as the “City of Pines”.

Travelling Abroad: 5 Things To Think About

Unusual places in Japan to visit at least once in life