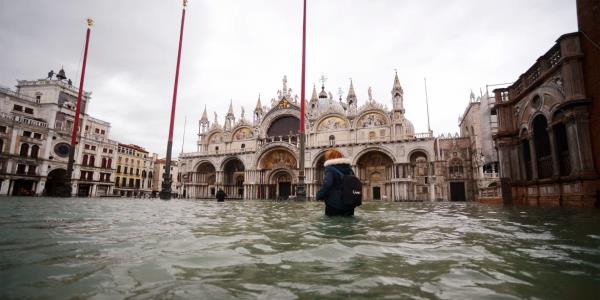 Our world is in danger, extreme danger and it’s all our fault. Climate change, mismanagement and the greatest threat, humans, are seriously compromising the future of many of the most beautiful destinations on Earth. We have drawn up a list of the places to visit before they disappear.

Located off the coast of Australia, the Great Barrier Reef is the largest and unquestionably the most breathtaking coral reef in the world. Increased ocean acidification, pollution, cyclones and water temperatures are causing a serious problem of coral discoloration. That’s why it is on of the places to visit before they disappear. More than half of the Great Barrier Reef has already disappeared in the last thirty years, but the rest of this natural beauty could be pulverized before 2030.

Places to visit before they disappear – Maldives

It is known as the “lowest” nation in the world (over 80% of the 1,200 islands that make up the picturesque Maldives are less than one meter above sea level) and it is therefore no surprise that this group of islands is currently endangered by the rising waters of the world’s oceans.

The outlook has become so terrible that the President of the nation has announced that the federal government will begin a campaign to purchase land in other nations for the possible relocation of all citizens. It is predicted that within a century, one of the places to visit before they disappear, will cease to have the necessary conditions to sustain human life.

At the risk of disappearing is also one of the Seven Wonders of the Modern World. This place, Unesco World Heritage Site, represents a unique archaeological testimony, the site is in fact entirely excavated in the rock and there are no adequate words to describe it.

Precisely the characteristic that makes it unique is the one that could be fatal. The tombs and temples made of sandstone, due to mass tourism that often welcomes visitors who are not really polite and respectful, are in danger of crumbling. It is definetly one of the places to visit before they disappear.

Places to visit before they disappear – Madagascar

It is the fourth largest island in the world, which is also home to some of the richest tropical rainforests in the world, not to mention the numerous and unique wildlife, including lemurs and mongooses.

However, the ecosystem of this island has been destroyed by poaching, deforestation and fires. Unless serious and effective measures are taken to protect this environment, it is expected that the inhabitants of the island and its rainforests will disappear in 33 years.

Places to visit before they disappear – Venice

The city of canals, gondolas and hundreds of bridges: Venice, the most beautiful city in Italy, is known for its waterways, but these could also be the cause of its ruin. Venice has already been sinking for centuries, but some evidence suggests that the process is accelerating. The city is sinking five times faster than thought, so consider to visit this place before it disappear!

Places to visit before they disappear – Dead Sea

Dead Sea, famous for its salinity that allows you to float effortlessly, is on the verge of extinction. The sea, which is said to have healing properties, regresses by about one meter every year. The cause is the scarcity of water that the Jordan River, the only one that flows here, brings to the Dead Sea.

Neighboring countries draw on the waters of the river for various activities and no longer allow regular flow. At the moment the sea has lost a third of its water, it is slowly disappearing place and a possible solution has not yet been designed.

In the 19th century, Glacier National Park in Montana had over 150 glaciers among the fabulous 16,000 square miles of protected territory. Today, as witnessed by the park’s curators, only 25 active glaciers remain. Scientists studying this area predict that current climate models could cause all glaciers to retreat by 2025, which would cause the destruction of both flora and fauna that depend entirely on the extremely cold climate.

Places to visit before they disappear – Seychelles

This is another series of islands in trouble in the Indian Ocean. The Seychelles, like the Maldives, are a tropical paradise that are facing the danger of complete submersion. Don’t miss the opportunity to visit this place before it disappear! Not only that, the problems of this territory also include the erosion of beaches and the destruction of corals. Experts claim that the Seychelles could end up completely underwater in the next 50 to 100 years.

In Angra, India, there is a truly majestic building, the famous Taj Mahal Mausoleum. It is also part of the World Heritage Site, as well as the Seven Wonders of the Modern World. And it is also one of the places to visit before they disappear. The excessive pollution caused by the growing urbanization of the area, as well as intensive tourism, could cause the public to close this building, whose white facades are becoming increasingly opaque, forever.

The Galapagos archipelago consists of thirteen volcanic islands and is located in the Pacific Ocean. These islands are famous for having inspired Darwin’s famous theory of evolution, here there are many species of animals that can only be admired in the archipelago. The uniqueness of these islands is endangered, as usual, by both land and sea pollution, rising water temperatures and terrible illegal fishing. The fragile balances of this microcosm are seriously at risk.

Glaciers of the Alps

Winter sports fans around the world will be disappointed to learn that their favourite “playground” will probably disappear by 2100. Do your best to visit the Alps before the glaciers disappear. Climate change and more specifically global warming are causing the glaciers there to retreat rapidly, especially as the summit heights are lower than in other mountains.

With their sandy beaches and sandstone cliffs, the Islands of La Maddalena are an enchanting place situated in the Gulf of San Lorenzo. The archipelago is regularly hit by strong winds and, although a wall of sea ice holds back some of the lashes, the island’s coastline is currently crumbling about 12 metres a year.

Even more worrying is the fact that the protective ice is rapidly melting. If the experts are right and the ice will melt completely within the next 75 years, the island’s coastline will be completely vulnerable to the area’s destructive storms.

Places to visit before they disappear – Alaska

The tundra of Alaska is one of the most distinctive features of the northernmost state in the United States. Yet climate change has led to the melting of the region’s permafrost, which not only endangers infrastructure but also dramatically alters the ecosystem.

The city of Timbuktu seems to be a place to disappear because of desertification. It seems, in fact, that the sands of the Sahara desert are advancing at a fast pace and will not only swallow up Timbuktu but also many other cities. A real shame: the site enjoys an almost magical and mystical atmosphere, as in the past it functioned as a cultural and religious centre.

The Congo Basin in Africa is the second largest rainforest in the world and is also one of the most biodiverse areas, with over 10,000 plant species, 1,000 bird species and 400 mammal species. In recent years the forest, which covers an area of about 3,730,500 square kilometers, has quickly disappeared due to illegal mining. The United Nations also predicts that it may become completely extinct by 2040.

Like the world’s largest glaciers in Antarctica and Greenland, the Patagonian South Icefield between Chile and Argentina is suffering the effects of global warming and retreating at a shocking speed. Scientists have found that more than 90% of the ice mountains are melting 100 times faster than any other period in the last 300 years. In just 5 years, dozens of frozen lakes have already virtually disappeared.

The Grand Canyon was listed as one of the 11 most endangered historical sites in the United States by the National Trust for Historic Preservation last year.

It has earned a place on the list due to an increase in projects aimed at exploiting its resources, from mining in uranium mines to building resorts for tourists. These activities could lead to the destruction of significant portions of the Grand Canyon and its main water source, the Colorado River.

The rainforest called Amazon Rainforest in Brazil covers more than 7 million square kilometers. Considered one of the main green lungs in the world, it is also home to rare animal species and rich and varied vegetation.

A true natural wonder of the planet, if it were not that, due to the continuous exploitation of its resources by man, has already been deforested for a good part. Climate change and global warming risk putting an end to the life of the forest.

Places to visit before they disappear – Miami

No one would ever think that one of America’s major and best known places is in danger of disappearing, but it does. Miami, Florida, is a vibrant and ever-expanding city, but despite everyone’s efforts to combat global warming, it’s thought that the city will sink below rising sea level. Scientists have determined that by 2100 the planet will be affected by a rise in the oceans of about 4.3 – 9.9 meters and that this will lead to the submersion of several coastal cities, including Miami.

The Great Wall of China, China

It seems that even this immense building, famous for being even visible from the Moon, suffers the passage of time, the effects of hydro-geological instability, pollution and, as always, local and tourist incivility and vandalism. According to the Great China Wall Association, in fact, what remains of the entire route (built around the 13th-14th century) is only 10% well preserved, while the remaining 90% would be at risk or have already suffered irreversible damage.

Grutas de Tolantongo – All you need to know in 2023