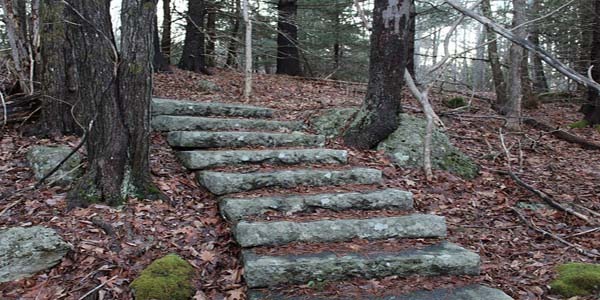 In 2019 a Reddit user shared a story that, at the time, could seem a pure fictional story born from the desire to arouse the attention of readers. From that post, however, numerous testimonies were born, and today it is clear that those stories are not invented, or at least, most of them are not. These stories speak of the mysterious stairs in the woods, apparently without any logical explanation.

Stairs in the woods explained

The simple explanation of the Stairs in the woods phenomenon is: These are stairs that rise from the ground and go up to the sky. The mysterious stairs are most often seen at night and look as if they were built in the woods out of nowhere. There is no other structure or building around them.

The staircase is an architectural element that serves to climb from one floor to another of a building. Stairs can be made in many different ways. There are spiral staircases and ladders, there are large marble staircases or stairs made of wood. From a practical point of view, they have an immediately conceivable utility. From a symbolic point of view, in literature the concept of “ladder” also implies the concept of ascension from one condition to another superior.

What is certain is that we cannot imagine staircases in the woods that are detached from its context. It is an element of passage or conjunction: a staircase that leads nowhere would make sense. On the contrary, let’s face it, it would disturb us even a little bit. Here, basically, the meaning of the story told on Reddit by searchandrescuewoods, a user who says he really works for the search and rescue team of people who get lost in the woods.

His testimony concerns an American forest, and as we will see many others come from the same geographic area. He explains how, during rescue missions within the dense vegetation, it is not at all unusual to encounter stairs. Stairs that emerge from the trees, which lead nowhere, standing alone and with an unusually robust appearance. The man says that the first time was forbidden.

His superiors, however, told him that he should not be surprised, that it was quite normal. The man, however, says that he intuited, in a completely instinctive way, that he should not climb on it. Later, he did as his older colleagues had told him: he ignored them, even though he had met many others in the years to come.

Names and locations of the most famous staircases in the woods

You could think of an urban legend, as many of them go around the web. But the testimony of this user of Reddit has been followed by many others of people scattered in the USA, but also in the rest of the world. The reports are so detailed that it is impossible to believe that they are invented from scratch. There are stairs in the woods and if in some cases they can also be explained as what remains of an old building now destroyed, in some cases they are more mysterious.

What always strikes the observers is the fact that the staircases in the woods, even if devoid of context, do not seem abandoned. They are always well cleaned, free of vegetation or excrement or other animal remains. They are of any material and shape: sometimes in stone, they seem very old. Other times they have a modern look and are perhaps made of iron, like those that lead to the top of a lighthouse.

In some cases, not far away, there is a cemetery or burial place. Almost always in the area where the stairs are located someone has disappeared. The stairs are never at the offshoots of the vegetation zone but always in the center, several miles away from towns. Everyone speaks of an unnatural sense of anguish and oppression when approaching them, to the point that only a few daredevils had the audacity to climb them.

Read also: When is the best time to go to Cancun

Testimonials for stairs in the woods

One man tells something that happened to him personally when he worked as an infectious disease expert for the U.S. government health care agency. It was the 1940s, shortly after the famous Roswell accident, and there had been cases of mutilated animals. During the six months of research in the area, many stairs were sighted that seemed to move at night. Where they had previously been, an area appeared to be burned.

There are also testimonies from outside the States: for example, from the Philippines (where btw you can enjoy one of the most beautiful events in the world: Panagbenga Festival). One man says he was fired from his job as a forester for being absent for several years while he was on reconnaissance. He says he climbed a ladder that he found in the thick of the woods to escape a stray dog with a threatening air. In his opinion, only a few minutes had passed when he went down again: in truth, five years had passed.

In Sweden, two young men found a solitary ladder and decided to climb it. One of them felt his shoulder touched and turned, thinking it was his companion, but the latter was too far away to have touched him. The touch, he says, was icy. Another story tells of a woman who was on the ladder, who fell suddenly, dead. The report spoke of a brain aneurysm.

Staircases in the woods that exist

While everything we have written may seem to be the result of pure fantasy, we must not forget that stairs that lead to nowhere exist, and how. Apart from some photos posted as testimonials (very few, in truth, because those who approach these artifacts usually just want to get as far away as possible) we can also mention “famous stairs”. There is for example the one of the pyramid of Bomarzo, or the one on the Phnom Kulen massif in Cambodia.

What explanation to these architectural anomalies? The most prosaic one speaks of the remains of buildings that have deteriorated over time, leaving only the stairs in the woods as mute vestiges of their existence. There are those who speak of aliens, or portals to another dimension, or even to hell. There are those who say that the stairs are used as unholy pulpits for satanic rituals. All agree that they are located in places that emanate an open energy.

In some cases, they may be the ancient remains of those who moved their steps on this earth before us. Perhaps they are an echo of what once was, and has passed away leaving little trace of itself. They are the memory of a distant time when our ancestors endured difficulties that we can barely imagine, leaving behind little evidence of their existence: only a few staircases in the woods and a few faded tombstones.

For more interesting places and destinations visit our blog or homepage.

The best beaches in Crete