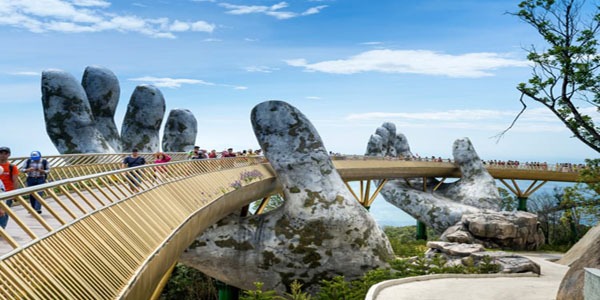 Attracting almost 20 million tourists every year, Vietnam is considered one of Asia’s travel hotspots. And it’s easy to see why. Not only does it have a rich history and culture, but the country is also beset with awe-inspiring mountains, beautiful, golden beaches, and friendly locals. It also happens to be the home to some of the best coffee in the world. But while Vietnam is slowly emerging as a tourist hotspot in Asia, thrill-seekers might not be interested in heading straight to the popular destinations that are tourist magnets. If you’re the unconventional kind of traveller, you might want to have an entirely different itinerary composed of places that are cool and obscure. Luckily, Vietnam doesn’t disappoint on that front either. Here are some unusual places to visit in Vietnam:

Locally known as the Am Phu Cave, Hell Cave is found in the marble mountains between Danang and Hoi An and has grown popular amongst tourists due to the unique cave formations and pagodas etched into them. Then again, to say that it’s unique would be an understatement. What reels tourists in is actually the recreation of a Buddhist hell where sinners are to confess their crimes, suffer their punishments, and hope to gain entry into heaven. It’s quite literally getting a taste of what hell is supposed to be like. True to its name, the path to “enlightenment” isn’t easy, either. You have to endure inconsistent railings and climb steep, twisting stairs, but once you arrive at the Road to Paradise which is the final ascent, you’ll be rewarded with a stunning view over the city and the beach, making all the effort worth it.

Sometimes, you don’t really need to embark on an adrenaline-pumping adventure in order to have fun. People-watching and immersing yourself in the daily routine or daily life of a local is already an enriching experience in and of itself. In Vietnam, Train Street in Hanoi is the perfect spot to have some well-deserved and fulfilling downtime. A feature on things to do in Vietnam by Expat Bets details how “train street” is the ideal place to see locals go about their day-to-day activities. You’ll find a humbling view of a neighbourhood and observe as locals clear hanging clothes, stash away their things inside their homes, usher their kids indoors, and just go about their day-to-day routines. What’s truly unique about this area is how many speeding trains pass through the narrow streets, and barely anyone bats an eyelash. If you want to witness this, it’s recommended that you go here at around 3 in the afternoon and 7 in the evening.

Yup, it’s not just San Francisco that has a popular “golden” bridge — Vietnam has its own, too. But unlike the Golden Gate, Vietnam’s Golden Bridge (or Cau Vang in Vietnamese) is “held up” by two giant stone hands, which is specially designed by TA Landscape Architecture. The hands are amazingly constructed from fibreglass and wire mesh positioned around steel supports. While it’s fairly new, the hands are decorated with cracks and moss to make them appear like they’re aged stone ruins. This unconventional structure was undoubtedly created to lure more tourists in, but it’s worth it. You can find it atop the Ba Na Hills, accessibly by a 20-minute car cable ride up the hill. You will have to spring for an entrance fee to the amusement park, but your ticket automatically grants you a cable car ride to the Golden Bridge.

We all imagine water parks as places of endless fun, but wait ’til you see Vietnam’s abandoned water park, Hồ Thuỷ Tiên, which offers a glimpse of a post-apocalyptic adventure. One of the country’s best-kept secrets, it was once a thriving park which drew tons of visitors thanks to its slew of waterslides and aquariums filled with exotic fish and crocodiles. Reportedly costing $3 million to build, it mysteriously shut down in 2004 for unknown reasons. Still, this didn’t deter tourists from visiting the place, albeit in its desolate state. Those who want to explore places with a dystopian feel to it will be thrilled to take a trip and explore this abandoned park. There you’ll find unkempt foliage, broken concrete, and graffiti, making you feel like you’re visiting some place frozen in time, which technically, kind of is. Before you add this park into your itinerary, though, you must note one curious tidbit about this place: it cannot be found on digital maps. For more tips about travelling in Asia, check out our page to keep abreast with all the best places to visit.