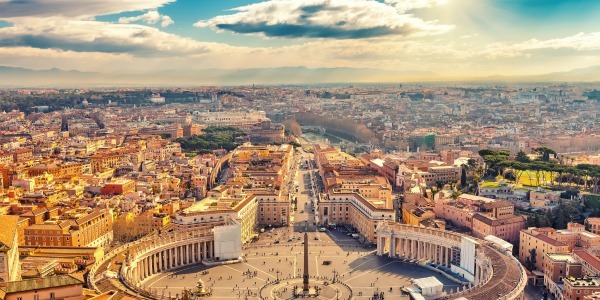 To orient itself in the immense historical-architectural patrimony of Rome represents a complicated challenge for all those who want to visit the city especially having a relatively limited time available. There is however a list of pillars essential for any trip to the capital that we have enclosed in twenty unmissable attractions. You should check all other beautiful cities on our home page, but the 13 best places to visit in Rome are here:

Among the parks of the city is worth spending a day at Villa Borghese, both for the view that you can enjoy from the terrace of the Pincio that for the countless museums inside the gardens, first of all the Galleria Borghese, which houses a large number Works by famous painters and sculptors such as Caravaggio, Tiziano, Raffaello, Bernini and Canova. Not to mention the magnificent Italian and English gardens that can be admired all along the park.

Always closely linked to the theme of water other imposing architectures that is one of the best places in Rome are the thermal baths. The most authentic are the imposing Terme di Caracalla Sull’aventino, while the Baths of Diocletian All’esquilino is present today with the addition of the Church of Santa Maria degli Angeli and Martyrs and the annexed Carthusian cloister by Michelangelo in the middle of the 16th century.

A visit also deserves the Fontana Dell’Acqua Paola, the so-called “Fontanone”, which triumphs on the slopes of Gianicolo, where you can also enjoy one of the most extensive and beautiful views of Rome.

Among the fountains the most popular and best to visit one is the Fontana di Trevi, built by Nicola Salvi in the lee of Palazzo Poli and completed in 1732 by Giuseppe Panini, while the famous central nucleus with statues of the ocean God, two sea horses and two Tritons is the work of Pietro Bracci, one of the greatest late Baroque sculptors today buried at the Pantheon.

9. The squares of Rome

As for the squares – which are at the level of urban neuralgic places for the city of Rome – the five not to be missed are: Piazza Venezia with the Victorian. Piazza di Spagna, where triumphs the church of the Trinitarian dei Monti. Piazza Navona with the fountain of the four Fiumi of Bernini and the Church of Sant’Agnese in Agone of Borromini. Piazza della Rotonda in which dominates the Pantheon.

And Piazza del Popolo with the church of Santa Maria del Popolo originating in the 11th century but restored by Bernini in 1660 where it is possible to admire masterpieces such as The version of St. Paul and the crucifixion of St. Peter of Caravaggio, as well as several frescoes by Pinturicchio, the assumption of Annibale Carracci, in addition to the architecture of Raffaello Sanzio and Bramante and the two twin churches, Santa Maria in Montesanto (1675) and Holy Mary of Miracles (1678) that give life to the famous Trident, formed by Via del Corso, via del Babuino and Via di Ripetta.

Another of the seven Hills that deserves special attention is the Aventine, an area where you can admire the only pyramid of the city, tomb of the praetor Caio Cestio built in 12 B.C. immediately after the conquest of Egypt by the Empire. There you can climb up to one of the most visited places in Rome like the garden of oranges and where you can enjoy a special view of the Dome of St. Peter through the keyhole of the gate of the Priory of the Knights of Malta.

You will travel to London? Check all the free things to do in London here

7. The Capitol and the Capitoline Museums

Among the hills occupies a place of excellence the Campidoglio, which has always hosted the most important state buildings in the history of Rome. Until in 1534 Michelangelo intervened on the square donating the current accommodation and that today houses the Capitoline Museums , born from the antiquarian collections of the various popes from 1471. Then Pope Sixtus IV donated to the city a collection of important bronzes that he placed in the palace of the conservatories, thus giving life to the oldest museum in the world that was open to public visits from the 1734 At the behest of Pope Clement XII.

There is also an infinity of other churches, among which perhaps the Baroque ones represent one of the most sumptuous moments for the city of Rome. Between them St. Louis of the French with the Contarelli chapel and the works of Caravaggio, S. Andrea della Valle designed at the end of the ‘ 500 by Giacomo della Porta and Carlo Maderno, with the baroque façade of Carlo Rainaldi, the Church of Jesus by Vignola and Giacomo Della Porta with the illusionistic decoration of the vault by Giovan Battista Gaulli, the church of Sant’Ignazio da Loyola also with the Amazing quadrature of the Jesuit painter Andrea Pozzo and the Church of S. Ivo to the Sapienza admirable work of Borromini of 1642 that is grafted on the existing courtyard of ‘ 500 Pirro Ligorio and Giacomo Della Porta.

5. The other major basilicas

In addition to San Pietro the other three basilicas that enjoy the title of best place to visit in Rome and represent a stop not to be missed in a stay in the Eternal City are: S. Giovanni in Laterano, which is the first of Rome since St. Peter belongs to the Vatican City , S. Paolo outside the walls and S. Maria Maggiore, all three of Paleochristian origin but full of renaissance and Baroque remakes that make them rich in history and therefore necessary to visit to understand also the evolution of taste in art over the centuries.

Once in the area Borgo Pio can not miss a visit to Castel Sant’Angelo, built in 130 at the behest of Adriano as a place of burial for himself and his family until over the centuries his history was increasingly intertwined with the papal events, given also the closeness to the bases Lica di San Pietro, until being joined in 2014 in the Polo Museum of Lazio and to host today a rich gallery of ceramics, sculptures and paintings and to offer a magnificent view towards Corso Vittorio II.

3. The Basilica of St. Peter and the Vatican Museums

As for the basilicas, there is no lack of a visit to St. Peter and the majesty of the façade of Carlo Maderno, the Dome of Michelangelo and piazza by Bernini reigns unchallenged among the first attractions to visit in Rome together with the Vatican Museums hosting some of the richest art collections in the world, including: The Pinacoteca which contains works by painters such as Giotto, Leonardo, Raffaello, Caravaggio, a collection of modern religious art with artists such as Francis Bacon, Carlo Carrà, Salvador Dali, Paul Gaugin, Wassily Kandinsky, Vincent van Gogh, not to mention the magnificence of the Vatican palaces that host environments of a unique artistic and architectural merit such as the Sistine Chapel, the gallery of maps and the rooms of Raffaello.

In addition to the Roman Forum, among the Roman forums there are also the imperial forums, which include the Caesar’s Forum, the Forum of Augustus, the Temple of Peace, the Forum of Nerva and the Forum of Traiano with the remains of the Basilica Ulpia, the Traana column and the famous markets.

The itinerary of the 13 things to see in Rome can only finish with the undisputed king of all the monuments. The archaeological Park of the Colosseum, which holds the supremacy of tourism of the capital, the best place to visit in Rome, and which includes in addition to the amphitheater Flavio, also the Roman Forum – the The oldest center of Roman civilization – the Arch of Constantine and the Palatine Hill, the first aristocratic residences and imperial palaces, then the Domus Aurea and the Domus Flavia.

4 historical spots in Portugal you won’t want to miss