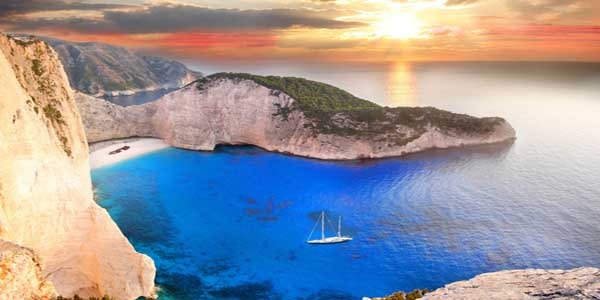 Little white houses, turquoise sea as far as the eye can see, romantic sunsets, Mediterranean scents, mythological references… This is the idea that most of us have of the Greek islands, among the most popular sea destinations in Europe. But with more than 5,000 islands and islets, choosing is not easy, and making a ranking of the most beautiful is a very difficult task. We want to help you by introducing you to our favorites (here is the second part of the post).

And if you want to find out which are the beaches best suited to your tastes, we have selected for you the most beautiful Greek islands. Find out which one is right for you, it could be the perfect destination for your next vacation!

For our first choice, we play the classic. If you are looking for the perfect mix of the ingredients listed at the beginning of the article, combined with a touch of romance and a bit of nightlife that never fails on vacation, then this is the right island. Of volcanic origin, the rugged black beaches border the blue of the sea and the white of the little houses of Fira, a small village climbed on the west side of the island from which to enjoy breathtaking sunsets.

Black, red and white beaches, picturesque villages overhanging the mountains from which to enjoy unforgettable sunsets and lots of bars to go wild when the sun goes down. Santorini is ideal for couples looking for romance but also for friends looking for a mix of beach relaxation and fun.

Very close to Corfu, the second largest of the Ionian Islands, is the tiny, much lesser known but absolutely wonderful Paxos. An oasis of tranquility perfect for lovers in search of intimacy, who will find beautiful beaches and restaurants serving fresh fish in Gaios, the main center. The best time to enjoy the magical atmosphere is in the evening, when the groups of tourists disembarked from Corfu for a day trip leave and you can sit at a tavern table and drink an ouzo.

It goes without saying that Mykonos is the best choice for those who want to party. The holiday atmosphere and the desire for fun take possession of anyone who lands on this island, which over the years has become one of the most popular in Greece. However, tourism has not affected the beauty of the landscapes, with the picturesque houses and narrow streets of Cycladic architecture and the crystal clear sea. Digging a little beyond appearances, the soul of Mykonos remains that of the traditional fishing village.

Mountains and impervious paths on which to venture in excursions and a wild fauna and flora rich. In the small and remote Tilos you can find yourself face to face with animals that will make you think you are at other latitudes, such as exotic birds and pygmy elephants. The beautiful beaches are rocky and quite difficult to reach, but on arrival you will “risk” to be the only visitors, even on August 15th. And at that point you will be surrounded by peace and nature.

Located in the Aegean Sea, about 20 km from Samos, it takes its name from Icarus, who legend has it fell into the sea near this island. Its beauty lies in being so impassable: mountainous and wild, with breathtaking views, in some places it remains almost completely inaccessible. The small bays are beautiful, you can relax in the thermal waters and the typical architecture transports you into an atmosphere of yesteryear, amplified by the quiet you breathe.  Will all these characteristics make the population of Ikaria among the longest living on the planet?

In the Sporades Archipelago, in the western part of the Aegean Sea, Skyros is the largest but probably also the quietest of these islands. There is no nightlife here, but during the day you can rent a bike or moped and wander the inland streets until you catch a glimpse of a beach on the horizon. The northern part is green and hilly, while the southern part is barren and bare. A contrast that will make you fall in love!

The southernmost island of Europe enters by right in our ranking for its uncontaminated soul and faithful to tradition. Here the tourist facilities are few, but you could also sleep on the beach under the stars, so much peace will infuse you with this place. Its beaches are among the most beautiful in Greece and probably the entire continent and the few inhabitants mingle with new residents, mostly artists, who choose to live here leaving at home watches and cell phones. Do not miss Cape Tripiti, the southernmost point of Europe.

The statue of the Venus de Milo, one of the symbols of classical beauty par excellence, was discovered here. And it is not difficult to understand where the inspiration came from: little Milos is in fact a true paradise. Still outside the circuit of mass tourism, this island in the southwest of the Cyclades is characterized by a lunar landscape, with rocks and white soil. But its strong point are the beaches: 70 bays, many of them hidden, all so beautiful that they leave you breathless. And, more unique than rare in summer, empty!

Cradle of the Minoan civilization and the largest island in Greece, Crete has something for everyone: large equipped beaches and wild nightlife in the north, wildest coves on the southern coast and mountains in the interior to immerse yourself in nature. The Caribbean aspect of the Elafounissi lagoon, the magnificent palace of Knossos and the welcome of the inhabitants of the island will help you to spend an unforgettable vacation.

370 kilometers of history, myths and green, white and blue beaches. This is Crete, the largest island of the more than 5,000 that form the Greek archipelago paradise that welcomes its visitors with the legend of the Minotaur, the caves where no less than Zeus was born and hundreds of beaches between one mountain and another. Its capital, Heraklion, is a modern city and offers all kinds of services and archaeological sites capable of making you travel through history until the time of Knossos Palace, when it was much more than the ruins that remain now.

In this island are summarized centuries of history, visible in its squares, markets and churches. This dose of culture is added to the enchanting beaches, some of fine sand, others of stone, where spending the day is a pleasure. Another interesting program is to visit the castle and enjoy the view of the bay or stroll along Nafklirou Street when the sun goes down. In Kos there are options for all palates!

Kos will surprise you not only by the amount of history that you can relive while walking through its streets but also by the mix of cultures that it boasts thanks to its proximity to Turkey (only 4 km away). Here I could see the tree that according to legend was planted by Hippocrates and under which he held his lessons. Or visit the temple of Aphrodite, goddess of love. At nightfall, Kos has a wide variety of bars and discos where you can meet people.

The best Christmas markets in the world to visit in 2020

The best music festivals to visit while on vacation

13 best free things to do in London