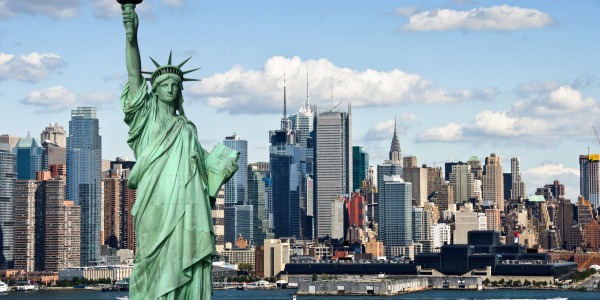 There are plenty of things to see in New York, and unfortunately one trip won’t include all the attractions in the Big Apple. So try to inform yourself well before you leave and plan your visit according to your tastes and times.

A good travel program, even not detailed, is essential to enjoy the best of your holiday. On this site you will find useful tips and itineraries to better define your personal program to visit New York.

So many things can be told about the Big Apple, but there is only one thing to do: visit it! Here are the things to see in New York for the first time. And one more thing – keep yourself from travel scams when you are on holiday!

What to see in New York during your first time? The list could be endless and a short holiday would certainly not be enough. Start then from the 20 stages that you just can’t miss: here are those!

The green lung of New York, but not only: in addition to the immense lawn and woods, in Central Park you can find three lakes, castles, restaurants, and a zoo. To spend whole days there without ever getting bored.

What initially remained empty and empty is now the most popular skyscraper for hundreds and hundreds of tourists, who reach the top of the Empire State Building to see the Big Apple from above. Two observation points, at the 86th and 12nd centuries, the top floor of the building.

3. The Statue of Liberty

Symbol of the city, symbol of freedom, and also symbol of immigrants – not only Italians – who helped to make New York what it is today. Two options to visit: reach Liberty Island to see it up close, or take one of the famous free orange ferries (Staten Island Ferry) to take wonderful photos of the statue with Manhattan as a backdrop.

The symbol of freedom, was given to New York by the French.

4. The Metropolitan Museum of Art

Definitely one of the most visited places in New York, the museum located on Fifth Ave. it offers 5 thousand years of history and culture, presenting the best of artistic creations in the history of man: from the treasures of the ancient Egyptians, to the present day with the most controversial and discussed contemporary art.

MoMA is not only the world’s most famous and rich museum of modern art with masterpieces by Vincent van Gogh, Claude Monet and Jackson Pollock, but in addition to its collection it also offers an intense calendar of temporary exhibitions.

MoMA’s inner garden gives you the chance to rest from the museum tour in an artistic atmosphere.

The Rockfeller plaza is home to fantastic shops (Lego, Anthropologie), bars and restaurants, as well as a wonderful skating rink in the winter season. And it’s not over: the Rockfeller Center is home to another prime New York vantage point, The Top of the Rock, on the 70th floor of the skyscraper. Address: 30 Rockefeller Plaza

A museum and memorial to the victims of the attack, the 9/11 Memorial, which is located underground for more than 10,000 square meters, was built. To see in New York.

8. The American Museum of Natural History

The world’s largest and most innovative natural history museum: you can travel through time to visit the most impressive collection of dinosaurs, and also in space, thanks to the spectacular Rose Center for Earth and Space, with scale reproductions of the universe and the Hayden Planetarium.

The famous train station built by Cornelius Vanderbilt is now as famous as the city’s museums thanks to the many films that take place at Grand Central Station.

The round museum, that of the uncle of the famous Peggy Guggenheim, which she called “my uncle’s garage”, is a marvel, both for lovers of architecture and modern art. The temporary exhibitions have also seen exhibited works by Italian artists, such as Maurizio Cattelan to whom a solo exhibition was dedicated in 2011.

The most famous stage in New York is that of Radio City Music Hall, which has seen, in addition to the famous Rockettes, musicians and singers such as Frank Sinatra, Liza Minelli, Ella Fitzgerald, Ray Charles, offers an always interesting calendar, and for fans, a behind-the-scenes tours.

The old railway line has been transformed over the past decade or so into an incredible suspended park that runs for miles across the city. The tracks have been maintained so as not to erase part of his history. You can access it from Chelsea ( and then choose whether to go north, or head south.

Opened in 1883, the Brooklyn Bridge is nearly 2 km long and connects Manhattan to Brooklyn. Its unmistakable silhouette with steel rods and sharp arches is one of the favorite subjects of all photography enthusiasts passing through New York.

14. The Cloisters Museum and Gardens

The section of the Metropolitan Museum dedicated to the Middle Ages is located here, in Fort Tyron Park, north of Manhattan. A real leap in time with five thousand works of art, including sculptures, manuscripts and tapestries, as well as a replica of a medieval garden with flowers and aromatic plants.

The amusement park, the teck walk walks, the most famous hot dogs in the world (metropolitan legends place here the invention of the mythical sandwich), and for the most daring, a dip in the ocean. Coney Island definitely deserves a subway ride to deep Brooklyn.

The world’s navel-gazing, the huge, busy Times Square is the obligatory stop on any visit to New York.

Read also: The best destinations to visit in Brazil

The night Times Square almost stuns for its thousand lights.

St. Patrick’s Cathedral on Fifth Avenue is a wonderful neo-Gothic church, a main place of worship for the Catholic faith in the city, in the heart of downtown Manhattan.

Perhaps the most beautiful skyscraper in New York, with its shimmering lines and Art Deco style, both day and night leaves you breathless for its beauty. It’s not open inside, but down the outside can be enough: remember to keep an eye on it as you move around the city.

Central Park, the city’s gigantic park, is framed by the city’s skyscrapers. The dome of the Chrysler Building.

The neighborhood south of Houston Street (South of Houston, hence SoHo), which has become famous for being redeveloped by 1960s artists – in the spacious lofts they built their studios – is now a concentration of trends, trendy shops, architecture innovative buildings and red-brick buildings. All topping up by the inevitable iron fire escapes.

Lincoln Center is a performing arts center, and the official headquarters of The New York Philharmonic Orchestra, The New York City Ballet and The Juilliard School, and The Metropolitan Opera, among others. It houses at least 8 theaters of different capacity, and a cinema. Guided tours are also possible during the artists’ rehearsals.

Do not miss the next best destination with Traveler Magazine!

The most interesting things to do in Mexico City this year