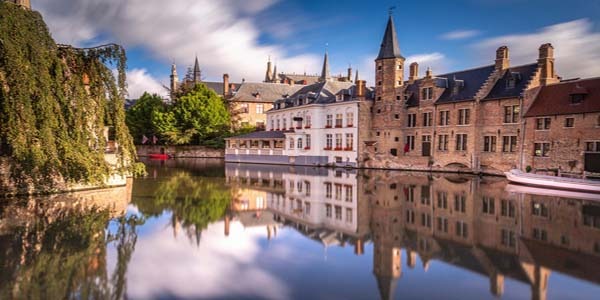 Belgium is a country with many curious facts. You’ll probably quickly associate it with chocolate, the protagonist of some of the best curiosities in Belgium. But this country, despite being very small, has great political importance. In this post we tell you the 20 best curiosities of Belgium for you to enjoy.

Belgium produces more than 220.000 tons of chocolate per year

To start with the best curiosities of Belgium, chocolate could not be missing. You always have to start with a good taste in your mouth! The Belgian chocolate industry has been very important since the 19th century and is now an important part of the nation’s economy and culture.

Together with Switzerland, it is one of the largest producers of chocolate on the continent. That’s why more than 220,000 tons of chocolate are produced every year – a real boon!

When we researched this fact, we were surprised. It is very curious that an airport is the place where the most chocolate is sold on the planet. Well, that credit goes to the Zaventem airport, the main airport in Brussels. Do you want some data? Almost 2kg of chocolate is sold per minute!

A diverse country with three languages, one of the best curiosities of Belgium

When you travel to Belgium, you may wonder what its main language is. In fact, Belgium has three official languages: Dutch, French and German. Surprisingly enough, Flemish is not a language, it is simply a dialect of Dutch used in Flanders. However, it is the mother tongue of more than 60% of the population.

But in general, one of the biggest luck of the Belgians is that they have the ability to speak many languages. About 65% of the Belgians speak perfectly Dutch, French and also English.

It is a diverse country, with many languages, but with very few mountains. In fact, the highest point in Belgium is barely 694 meters high. This is the Signal de Botrange on the Hautes Fagnes plateau in the extreme east of Belgium, which will not project great climbers!

In fact, one of the best things about Belgium is that the highest point in the country is lower than the building in the world, the Burj Khalifa in Dubai, which is 828 meters high.

The first skyscraper in Europe was built in Belgium

Maybe that complex of little people encouraged them to build the first skyscraper in Europe. It wasn’t going to be as tall as the Burj Khalifa, but at that time it was a big step forward. In 1928, the Belgians built the Boerentoren in Antwerp. At 96 meters high, it is the second tallest building in Antwerp today, only surpassed by the majestic Antwerp Cathedral.

This tower was the tallest building in Europe until 1940, when the Terazza Martini Tower was inaugurated in Genoa, Italy.

Belgian men are the second highest in the world

But strangely enough, despite the fact that the terrain is not very high, Belgian men are the second highest in the world. With an average height of 181.7 cm, only the Dutchmen surpass them! Although they have not been able to take advantage of it too well since there are no great Belgian basketball players.

Brussels has the oldest shopping malls in Europe

In Belgium you can find the commercial galleries with the most history in Europe. They are located in the beautiful Belgian capital, so if you spend the weekend in Brussels you can visit all of them. The Galleries St Hubert opened in 1847 and are very close to the famous Grand Place. There are several beautiful shopping galleries in Europe like Vittorio Emanuele II in Milan, but the St Hubert galleries are among the most beautiful.

Read also: Places To Visit In Vienna In 2 Days

Only Latvia and Lithuania exceed Belgium’s divorce rate, which is estimated at about 70%. About two-thirds of all marriages in Belgium are between first-time couples, while in the remaining third at least one person has been divorced.

New York was founded by a Belgian, one of Belgium’s greatest curiosities

Did you know that the Big Apple was founded by a Belgian citizen? Peter Minuit founded New York City in 1626. Minuit was appointed an explorer for the Dutch West India Company and traveled to America in search of trade goods.

But we don’t know if it was more surprising that a Belgian founded the city or the amount for which he bought the island of Manhattan from the natives. Minuit bought it for just 60 guilders, about $1,500 today. Without a doubt, one of the most surprising curiosities of Belgium.

Read about: The Best Time To Visit Norway

Antwerp is the diamond capital of the world

Antwerp has been an important focus of the diamond trade since the 15th century. As a curiosity, today about 84% of the world’s rough diamonds pass through Antwerp to be polished and shaped before they reach the stores. When you visit the city, don’t forget to take a walk in the Diamond Quarter near the central train station – you’ll be amazed at the stores!

One of Belgium’s most striking features is that it has hosted many exiles throughout its history. In the current context we can see this with Carles Puigdemont, former president of the Generalitat, who is in exile in Waterloo, but Puigdemont has not been the only one in history to go into exile in Belgium!

He is simply one more person in a long list that Belgium has to provide exile for intellectuals and artists for decades. For example, Karl Marx was forced to emigrate to the Belgian capital in 1845 after being expelled from both Germany and France because of the political ideology he was spreading. In fact, from Belgium, he wrote, together with Friedrich Engels, his most famous book, the Communist Manifesto.

You love mysteries? Read about the phenomenon Stairs In The Woods.

The author of Les Misérables, Victor Hugo, also went to Belgium. Although he was not expelled from France, he did speak out against Napoleon III. That is why he escaped from France and arrived in Brussels in 1851.

But the most famous case is that of Albert Einstein. The German genius lived in Belgium intermittently between 1902 and 1933. Despite living in California, when he returned to Europe, Hitler had just come to power and decided to go to Belgium instead of Germany because the Jews were beginning to suffer the first discriminatory measures.

They help politicians and intellectuals, but sometimes they have trouble agreeing! One of the best things about Belgium is that the country was without an elected government for 589 days between 2010 and 2011. After the national elections, the Flemish and Walloon regions, which are opposed to each other, could not agree on political issues and form a government coalition.

However, in 2018, Northern Ireland broke that record, when it was without government for three years.

French fries, a dispute between the French and the Belgians, one of Belgium’s greatest curiosities

If we take into account the English name “French Fries” everything indicates that they are of French origin. Although the truth is that they should be “Belgian fries” because they were invented in Belgium. However, the French say that they were invented at the end of the 18th century in Paris. Anyway, in almost any corner of Belgium you can enjoy this delicacy. And please, eat them with mayonnaise and not with ketchup, just like the locals.

Chocolate is art on Earth, but the Belgians are the only ones who have art on the moon.  On its large white dunes and craters is a small statue called “The Fallen Astronaut”, by Belgian artist Paul Van Hoeydonck.

The statue was placed on August 1, 1971 and represents an astronaut in a space suit along with a poster with the names of the astronauts and cosmonauts who have died during the space race. Without a doubt, one of the best curiosities in Belgium.

Discover with us: The Best Time To Visit Portugal

Spa is synonymous with relaxation. Almost everywhere in the world this word is used to refer to the famous thermal or hydrotherapy centers, because the name comes from the Belgian village of Spa! Basically because the first spa was opened there in the 18th century, although it is true that these healing springs have been used since Roman times.

Belgium is not only a paradise for chocolate lovers, but also for beer lovers! There are currently more than 1200 varieties of beer in Belgium, more than any other country in the world. Belgium’s brewing tradition dates back to the early Middle Ages. Moreover, its origin is very curious.

With the permission of the Catholic Church, some French and Flemish abbeys brewed and distributed beer as a form of financing. At that time, it was believed that low-grade beer was a healthier option than water, which was not always drinkable at the time.

Now this is no longer the case, but this does not mean that on average, the locals consume about 84 liters of beer per person per year.

If you like castles, in Belgium you will enjoy them like a little child. There are more castles per kilometer in this country than in any other country in the world. Without a doubt, the most famous is Gravensteen in Ghent.

Belgium has the lowest gender pay gap in the EU, one of the best things about Belgium

Unfortunately, in many countries there is a huge gender wage gap. However, this is one of Belgium’s most positive features. The Belgian wage gap between men and women in Belgium is the lowest in the whole of the EU – to take that into account!

And finally to finish this post about the best curiosities of Belgium, we didn’t want to forget to mention the famous euro coins. You know who did the design? A Belgian! Luc Luycx was the winner of a European Union design contest. In fact, if you look closely you can find his initials “LL” on any common face of all euro coins.

The best time to visit Portugal?